Australia’s highest earners believe they are middle or lower class – despite earning more than $200,000 a year 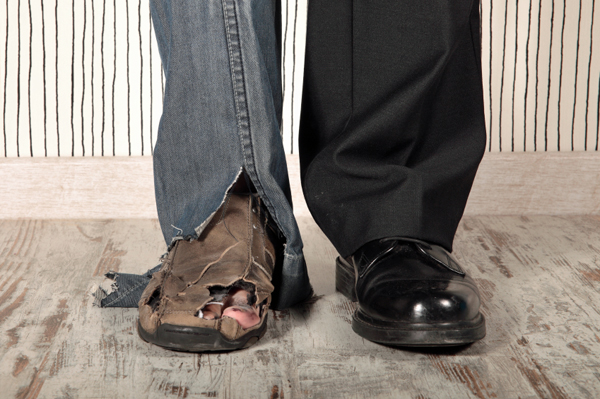 The majority of top earners inAustralia consider themselves to be middle or lower class, despite having a household income of $200,000 or more, according to a report released this week.

Middle class has seemingly become an umbrella term to describe almost everyone in Australia, except for those at the very top and bottom of the scale, according to the research conducted by Ipsos Australia for MLC Wealth.

The Australia Today report by Ipsos Australia for MLC Wealth assessed the lifestyle, financial security and retirement plans of 2000 Australians and found a consumerist culture is dominating more than ever before.

Two thirds of high-income households surveyed in the report consider themselves to be “middle class”, “lower middle class” or even “working class”.

For many of those surveyed, middle class is considered to equate to a salary of at least $100,000 or more. The label also potentially applies to white-collar workers, those who have an investment property or the house paid off, and those living in a major metropolitan area.

Many defined middle class as being able to send their children to private school and pay for their extracurricular activities.

Nearly half of all survey participants agreed an annual household income of at least $150,000 is needed to live comfortably in Australia.

Three in five people believe that having $1 million in wealth does not qualify as ‘rich’ in Australia, particularly for those living in Sydney and Melbourne or those with a household income of more than $200,000.

The report also highlighted a generational gap, with 40% of younger people considering eating out once a week more important than their parents’ generation.

However, low-income households that participated in the study believe $549,000 is enough to be considered upper class.

According to Ipsos Research Director Laura Demasi, “the way Australia’s middle class lives today is like the previous upper-middle of a generation ago.”

“People have rolled lifestyle factors into what they now call ‘standard of living’ and are confusing the cost of living with the cost of quite an affluent lifestyle…actually these factors are not standards of living, they are over and above those factors,” she said in a statement.

If one divides the wealth into three equal bands, I would have thought it logical to consider “Upper Class” as all who have greater than the average wealth, middle in the middle and lower into the bottom band.
Facts determine all, while perception is everything to those who don’t have the facts. If people “Percieve” another to fall into a band, that is perception only, the facts of the matter may be entirely different.

It would be very interesting to know what benchmarks were used to classify the participants in this survey. The “research conducted by Ipsos Australia for MLC Wealth” would seem to indicate it’s targeted to investors and all “high-income” earners. Do they also make up the majority of participants? And does this mean a household income of under $70K are somehow surviving on less than half of what is “needed” yet welfare payments aren’t available until you’re earning less than half again?