Australian chief executives are among the highest paid in the world, with salaries topping $10 million for the heavy-hitters in the biggest companies.

But many of the top earners are taking home 25% or more than their companies are declaring.

New research on chief executive pay from the Australian Council of Superannuation Investors [ACSI] shows that the highest-paid chief executives in the top-100 ASX-listed companies earned 60% more than their companies reported, using their statutory reporting formulae in their annual reports.

However, their companies reported their incomes as totalling $109.2 million in their remuneration reports. 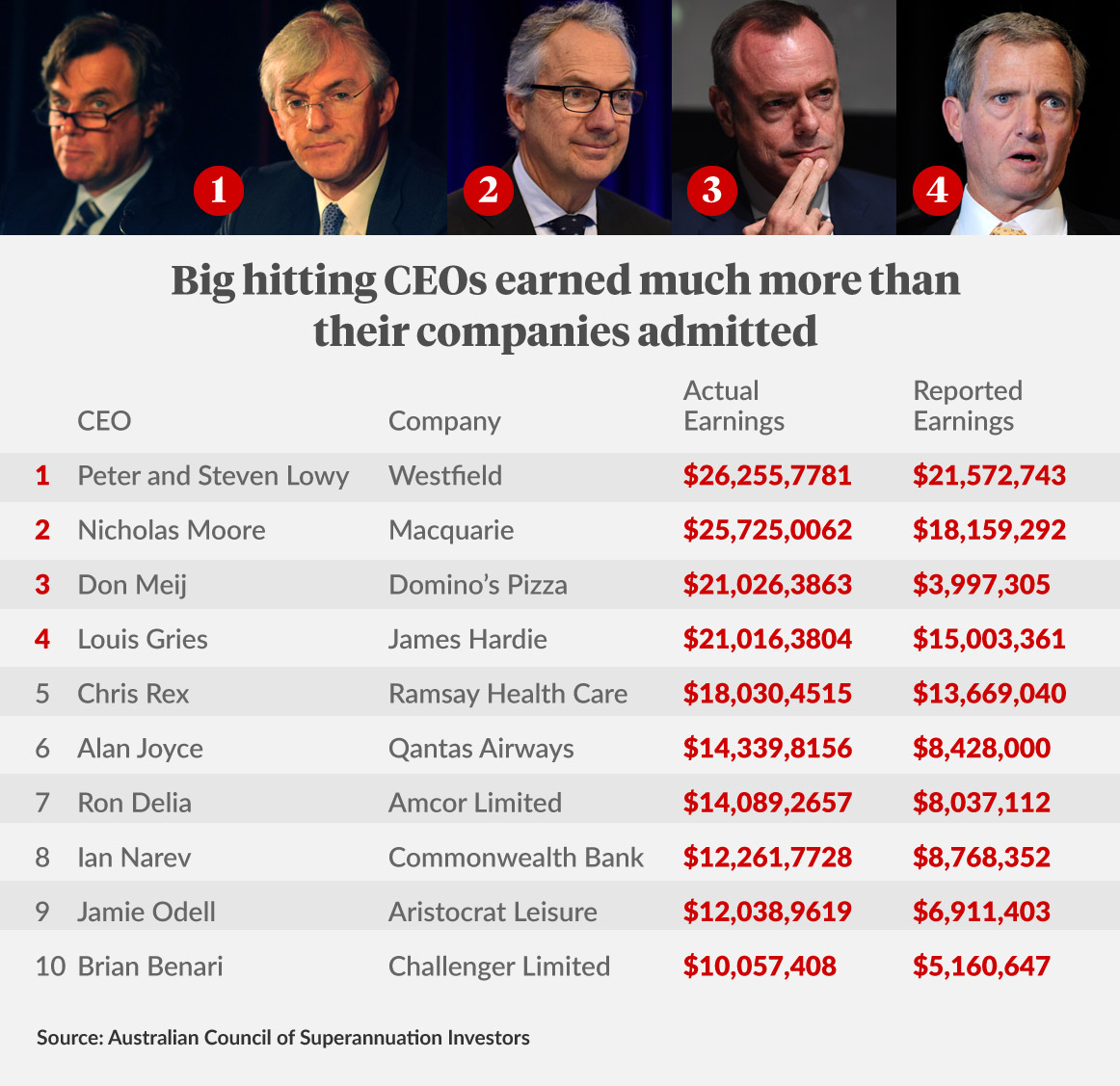 Across all the top-200 companies, average pay earned by chief executives in the 2016 financial year was 10.3% higher than reported pay.

The difference comes as a result of the formula used by companies that includes the nominal costs of incentive payments involving shares being subtracted from pay.

ACSI removes these costs and adds in any benefits earned from share-based schemes that reward chief executives in the year they are actually received.

It sounds complicated but what it does is detail the actual earnings in the year they are received.

As the above table shows, the differences can be quite remarkable. For example Don Meij, the chief executive of Domino’s Pizza, had statutory pay of $3.9 million but managed to actually bring in $21.02 million because the company’s meteoric share-price rise boosted the value of stocks and options he received in 2015-16.

The Lowy brothers pulled in a collective $26.25 million, compared with the $21.5 million the company reported. ACSI makes the point that if they were treated as individuals, each would have made it into the top-10 income earners.

Judith Fox, chief executive of the Australian Shareholders Association, told The New Daily “we call on companies to disclose actual pay, not just the statutory pay”.

“However, it cuts both ways. Last year BHP’s CEO earned quite a bit less than the figure in the statutory formula because of the company’s performance. It happened with Metcash this year,” Fox said.

The research also showed that 86% of chief executives received a bonus and, of those that did, the median payout was 69% of the maximum allowed. ACSI chief executive Louise Davidson said these payments appeared to be excessive.

“The prevalence of CEO bonuses at consistently high levels raises serious questions about the way performance hurdles are being designed and applied.”

“The fact that only 18 CEOs received bonuses below 50 percent of maximum indicates that they bear little relation to performance in many companies.

“ACSI wants to see more variability in the remuneration paid to individual CEOs to convince us that they are being appropriately stretched, and investors rewarded, in exchange for such substantial incentives,” Davidson said.

Companies appeared to be responding to public pressure on excessive executive pay.

“In the case of the CBA, the independent chairman and board acted immediately to cut incentive payments to the CEO and executive team when the AUSTRAC [money-laundering non-reporting] issue broke,” Fox said.

“We think in general companies are starting to respond,” she said.

She was listed as earning $1.3 million on the statutory formula but took home $5.8 million.

What an absolute disgrace. Don Meij at number 3 when his employees are officially the lowest paid workers in the Country…of course he’s not in the Pizza business, so struggling Franchisee’s will probably bear the brunt when the Fair Work Commission finally pulls its finger out.

Right here is the unacceptable face of capitalism. I am nowhere near being a socialist, but most of those numbers are gross and an insult to every hard working Australian. Make a fortune out of your own business or idea, fine, but no-one is worth those numbers selling their time and skills to a Corporation.

Could not agree more Peter, the more I see this sort thing the more Socialist I seem to become.