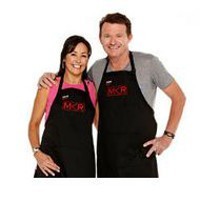 A contestant on Channel Seven’s popular reality cooking television show My Kitchen Rules who filed for bankruptcy last year could be stripped of any winnings from the show, according to bankruptcy experts.

Adam Anderson, who owned and operated a tennis coaching business in the Sydney suburb of Neutral Bay, filed for bankruptcy in April 2014 owing creditors more than $200,000, according to documents obtained by Fairfax.

Anderson, who stars on the reality program with his wife Carol Molloy, is in the running for the show’s $250,000 grand prize. But experts say if Anderson is to win any prize money it will likely be immediately paid pack to creditors.

“What happens when you go bankrupt is a bankruptcy estate is created,” George Ams, owner of advice service The Bankruptcy Centre, told SmartCompany.

“Any money or assets you won, and that includes any winning or inheritance would go into estate. The trustee of the estate then pays all creditors the full amount owed plus any interest.”

Fairfax reports Anderson owes money to 15 creditors, including several banks and money lenders, the Australian Tax Office, a private girls school and the Neutral Bay Club sports club, where he housed his tennis coaching business out of a shed and rented a tennis court for lessons. He allegedly left owing the club $17,500 in unpaid rent.

“It hurt us like buggery because we’re a little club,” Sam Knox, manager of Neutral Bay Club told Fairfax.

Knox said Anderson, who was at one time a professional tennis player, had begun making irregular repayments on his rent and had then switched from a full year lease on the premises to a month-by-month payment. He said the money owed was the difference between the club making a profit and loss last year.

Gess Rambaldi, Pitcher Partners business recovery and insolvency partner, told SmartCompany a person is only discharged from bankruptcy after three years and during that time any visible assets they have will be taken for the benefit of creditors.

“Whilst you are a bankrupt, if you are in the receipt of lotto winnings or get an inheritance, you have to share that money with creditors,” says Rambaldi.

Rambaldi says he has often seen cases where a bankrupt individual is left a sizeable inheritance, only to have to hand it over to their bankruptcy estate to be distributed to creditors.

Ams says once someone files for bankruptcy, it is very difficult to pay your debts back, because your income is highly restricted, having 50 cents of each dollar taken out after a certain earning threshold.

“Once you’re bankrupt, you’re better of complying with the trustee and just going through your three years,” says Ams.

Rambaldi agrees: “The whole point about bankruptcy is that it gives you a financial relief and allows you to get back on your feet.”

“It’s best to use that period to get back on your feet, to modify your spending behaviours, understand what caused your bankruptcy, so when you get back out you’ve learnt better behaviour and better financial management.”

Promotional material for the television show says Anderson met Molloy through one of the students he coached through his business. Her share of the winnings would not be affected by his bankruptcy.