Best of the Web: The Great Smartphone War between Apple and Samsung; Why do negative comments stick? 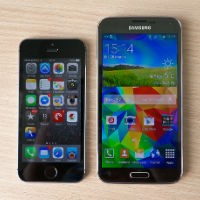 The Great Smartphone War: In this month’s Vanity Fair, Kurt Eichenwald uncovers what he terms “the great smartphone war” between Apple and Samsung. He outlines the battle which has been raging for almost three years between the tech giants.

Eichenwald says it is “on a scale almost unprecedented in business history”, costing more than a billion dollars and spanning four continents.

Beginning with the super-secret project that created the iPhone and the late Steve Jobs’s fury when Samsung—an Apple supplier!—brought out a shockingly similar device, Eichenwald explores the Korean company’s record of patent infringement, among other ruthless business tactics, and explains why Apple might win the battles but still lose the war.

Chemistry plays a big role in the phenomenon that sees a critique from a boss, a disagreement with a colleague, a fight with a friend sting while a month’s worth of praise or accord is easily forgotten.

Taking paternity leave makes other dads more likely to do the same: Writing in The Atlantic, Joe Pinsker uncovers a social snowball effect that might counteract the stigma that’s attached to dads taking time off for paternity leave.

Research has found fathers who take paternity leave make their brothers 15% more likely to do the same. Similarly, dads who see their male coworkers take time off are 11% more likely to take leave themselves.

“Armed with information of how an employer reacts to a peer’s paternity leave, a father will probably be a lot less worried about any unforeseen consequences at work,” Pinsker says.