Breathtaking: How this Canadian business is making cash by selling “premium” bottled air to China 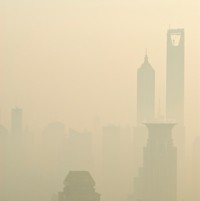 A Canadian business is selling bottled air to China in a sign that it’s possible to sell just about anything thanks to the power of the internet and social media.

Vitality Air claims to be “enhancing vitality one breath at a time” with its range of “premium” bottled air and portable oxygen products.

A 10 litre bottle of “premium” oxygen will set customers back $29.21 while providing more than 200 inhalations.

Vitality Air also sells twin-packs as well as different varieties of oxygen sourced from places like Lake Louise in Alberta.

Co-founder Moses Lam told UK paper The Telegraphthe business started out as a bit of a joke last year but demand has since gone through the roof since they started selling into China two months ago.

“Our first shipment of 500 bottles of fresh air were sold in four days,” Lam said.

“It’s very labour intensive but we also wanted to make it a very unique and fun product. We may have bit off more than we can chew. My parents told me not to quit my day-time job.”

Looking for that unique #stockingstuffer ? We have what you need! pic.twitter.com/LINQ26kle2

While Vitality Air has raised eyebrows among the entrepreneurial community, it has also received some criticism on social media.

“This is disgusting to sell air and make profit off people’s situation instead of actively seeking to lower pollution levels,” one woman wrote on Twitter.

“Producing mass quantities of these plastic and aluminium bottles will create more pollution,” another person wrote.

Vitality Air is not the first business to sell bottled air in China, where pollution can be a daily occurrence in the major cities.

In 2013, a Chinese millionaire began selling fresh air in soft drink cans, according to Fairfax.

Just last year the city of Hangzhou started rolling out a scheme where tourists are given bottles of fresh air in order to help combat toxic smog, according to The Daily Mail.