Buchan in regional Victoria is celebrating today after a crowdfunding campaign to see the town’s pub rebuilt raised more than $600,000, with so many last-minute donations it crashed the website involved.

The Buchan Caves Hotel burnt down in April last year, leaving the small town and its population of 400 people without a pub.

A Pozible crowdfunding campaign to rebuild the pub was created earlier this year to help raise the funds to rebuild it.

Run by a group who called themselves “The Town of Buchan”, the Pozible campaign called on the community to get behind the cause to rebuild the pub and help the land owners who had “no money to build a pub with”.

“This town can’t wait another year to get it’s (sic) pub back and so we are utilising this crowd funding campaign to raise the funds to re-build. We have a target of $600,000 and to reach that would be phenomenal,” the campaign’s mission statement reads.

It is not the first small business or even regional Victorian pub to have successfully turned to crowdfunding for help with finances, with the Tatura Hotel recently starting an Indiegogo campaign which saw any punter able to name something in the pub for a dollar. 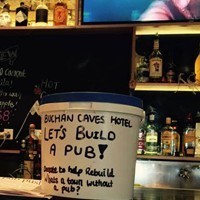 But the Buchan crowdfunding campaign is Pozible’s most successful in Australia to date, SmartCompany has confirmed.

The campaign’s project manager, Lyndel Moore, told SmartCompany this morning Pozible had its own celebration after it reached the $600,000 target.

“Pozible rung us late last night, they said ours is, in terms of the dollar target, the largest crowdfunding campaign in Australia,” Moore says.

Pozible’s general manager, Claire Merquita, told SmartCompany it was delighted with the result.

“We’re all very amused the biggest Pozible campaign has been a pub,” Merquita says.

“But it’s a super worthwhile project, we’re proud to have that as our biggest Australian campaign. We’re looking forward to going to pub for a beer once it’s open.”

Moore says the outcome was a huge achievement for the 60-day campaign, especially because the idea had only been put forward to the community a month before the launch.

“We wanted their endorsement to proceed,” she says.

“It was an overwhelming ‘let’s move forward’.”

The sheer number of people donating to the campaign in its final minutes “crashed the Pozible site” with about an hour left.

The campaign was at the $597,600 mark before it crashed but came back online just in time to smash its target, Moore says.

“We spoke to Pozible, they said we’ve never had this much reaction to a campaign before.”

Moore says she was one of four people behind the campaign, which included her partner Scott Kingman as well as Karly McCaskill and Charlie Wheelan.

“It was a beautiful, collaborative effort,” Moore says.

Moore is originally from Buchan and says while she hadn’t lived there for many years, she did relocate back to the area in October.

“The new pub had been gone a while, I thought, why are they not building it again?” she says.

As it turned out the former pub’s directors got an insurance payout and chose not to reinvest it back into the town, leaving it up to the land owner to come up with the money to rebuild.

“As small community in decline from the loss of the pub, they were not in a financial position to rebuild,” Moore says.

Moore says when she first pitched the crowdfunding campaign to the town they all thought she was “bonkers”.

Even once they got on board but there was still a bit of scepticism.

“A lot of people were like, it’s good but I can’t see it happening,” she says.

Last night, however, lots of excited town members gathered at the football sheds watching the mark get closer to the target.

“It’s a much bigger story than let’s all drink a beer,” Moore says.

“It’s about a small community who lost its heart.”

Now the group has reached its target, things are set to happen quickly, Moore says, with the first meeting to plan the rebuilding to be held on Sunday.

“We’re not messing around,” she says.

“We’d love to have it up by Christmas.”