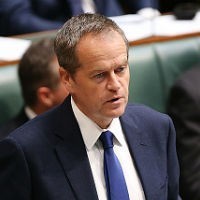 Opposition leader Bill Shorten has responded to the Abbott Government’s Growing Jobs and Small Business package by trumping several of the budget measures.

Shorten yesterday attempted to court the small business vote by using his budget reply speech to announce the Labor party would not only match the government’s proposed 1.5% small business company tax cut but would push the cut to 5%.

“A 1.5 per cent cut for small businesses might be enough to generate a headline – but it is not enough to generate the confidence and long term growth our economy needs,” said Shorten in his parliamentary budget reply on Thursday evening.

“So tonight I say, let’s go further. Let’s give small businesses the sustainable boost to confidence that they deserve,” he continued.

“I invite you to work with me on a fair and fiscally responsible plan to reduce the tax rate for Australian small business from 30 to 25%. Not a 1.5% cut, a 5% cut.

Amongst Labor’s other business incentives, Shorten pushed a science and technology agenda, including a call to raise research and development to funding to 3% of Australia’s gross domestic product over the next decade.

“I believe Australia can be the science, start-up and technology capital of our region: attracting the best minds, supporting great institutions and encouraging home our great expats,” he said.

He also pledged a Shorten-led government would:

It was a pitch to the STEM industry that caught the attention of Australia’s brightest tech stars, with Atlassian co-founder Mike Cannon-Brookes tweeting his support for Labor’s new platform.

Peter Strong, executive director of the Council of Small Business of Australia, was also impressed by Labor’s move to match the government on small business policies.

“What it shows is that the Labor party is listening and talking our language,” Strong told SmartCompany this morning.

“This is the Labor Party engaging with us like they’ve never engaged before.”

But Strong says if pushed to compare the two, the government’s small business package is “far more comprehensive”.

He believes the political tide has finally turned for small business, conceding the small business community was the belle of ball in this year’s budgetary conversations.

“While I can guarantee you there is still people in both parties that don’t get it, they are starting to realise there is so many of us and we vote, and a lot of us are swinging voters too,” Strong says.

“It’s not just politicians, it’s policymakers, people of influence and the media. They used to want have lunch with the big end of town but they are coming back to our table.”