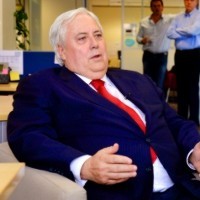 Mining magnate turned politician, Clive Palmer says the federal government either needs to deliver a mini-budget or call an election as the Senate will never approve the majority of the Coalition’s budget measures.

Less than a day after the government was able to deliver on its promise to axe the carbon tax with the support of Palmer United Party (PUP) senators, Palmer toldFairfax the government went about its first budget the wrong way.

“There are so many things that are unacceptable for most Australians,” said Palmer. “They tried to do everything in one day.”

Palmer said the government had not attempted to negotiate any of the budget measures with him and they were now left with little room to move.

“Ultimately, they will have to have a mini-budget or a double dissolution [election],” he said.

Palmer’s comments come as legislation to repeal the minerals resource rent tax heads back to the House of Representatives this morning, after Labor, the Greens and PUP failed in their bid to amend the legislation to ensure compensation for families is maintained.

The PUP senators support the repeal of the mining tax, but want to preserve measures introduced by the previous Labor government to compensate families for the tax, including the low income superannuation contribution and the income support bonus.

Finance Minister Mathias Cormann said yesterday the amendments would deliver a $10 billion blow to the budget, and the government would not support the amended bill.

According to Fairfax, $41 billion in revenue measures from the Coalition’s budget are at risk of being blocked by the Senate.

Peter Strong, executive director of the Council of Small Business of Australia, told SmartCompany the comments from Palmer only serve to create more uncertainty for Australian businesses.

“All it is doing is creating more uncertainty and that’s not constructive,” says Strong. “What benefits come from this uncertainty?”

But Minister for Small Business, Bruce Billson has moved to reassure business owners concerned about the uncertainty, telling SmartCompany this morning the government has a deep understanding of the business community’s “interest in a stable and supportive economic environment and a solid budget position”.

“We are working very carefully, thoughtfully and methodically to implement the budget,” says Billson. “And we will continue to make our case and engage with the crossbenchers.”

“The budget repair job needs to start now,” says Billson. “We’ve laid out our action strategy and we’re working to illustrate to the crossbenchers that it’s the right plan.”

SmartCompany attempted to contact Clive Palmer but did not receive a response prior to publication.