The number of Australian companies falling into administration rose in September, in the first increase in insolvencies since June.

According to CreditorWatch’s September Business Risk Review, the number of business defaults also increased last month, by 23%, for the first time since May.

Overall, the number of business insolvencies increased by 11% in September, with the largest increases recorded in Victoria and Queensland.

The data follows moves by the federal government to extend temporary insolvent trading relief to the end of December, while also unveiling plans to undertake a suite of broader insolvency reforms to help protect small businesses from the fallout of the COVID-19 pandemic.

The CreditorWatch data shows insolvencies increased by 23.8% in Victoria, following a 49.3% decline in August, and by 24.1% in Queensland, following a decline of 25.4% in August.

However, the number of businesses collapsing in New South Wales declined during September by 1.6%, following a drop of 34.3% in August.

However, analysis by CreditorWatch suggests some of the businesses that have been reliant on government payments are now choosing to wind up their operations as key payments such as the JobKeeper wage subsidies are reduced.

“However, September’s increase in default and administration rates does indicate that some businesses which have been reliant on government support are starting to accept the reality of their situation and are taking steps to settle with their creditors.”

Coghlan said the next six months will be “crucial in determining what position we start our economic recovery from”.

“What we don’t want to see is businesses that are doomed to fail continuing to operate and taking healthy companies down with them,” he said in a statement. 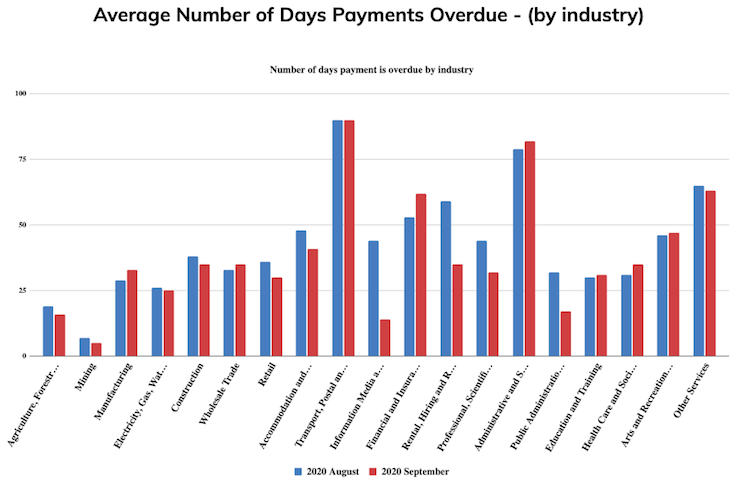 Payment times improved the most for information, media and telecommunications businesses, with the average number of days for bills to be paid dropping to 14 days in September — a decrease of 30 days.

On average, retailers were waiting 30 days for bills to be paid in September, an improvement of six days from August, while financial services and insurance firms saw their average payment times increase to 62 days in September, an increase of nine days from the month prior.

“For a signal of how Australian businesses are faring, payment times provide a glaring picture of how tough the environment is, especially when juxtaposed against 2019,” commented CreditorWatch chief economist Harley Dale.

“It is encouraging to see big declines in many sectors, such as IT and telecommunications and real estate, because when companies get paid quicker, it puts liquidity back into the economy, enabling firms to plan, invest and grow.”

NOW READ: While Frydenberg admits some small businesses “will not survive”, the RBA says up to 25% could fail