The Gold Coast and Western Sydney are the Australian regions where small businesses have the highest chance of credit default, new data from CreditorWatch shows.

The Business Risk Index, released today, ranks the regions and industries most at risk of business default and payments in arrears, which are indications of insolvency risk.

It’s no surprise the Sydney-based creditor reporting agency found businesses in areas hard hit by border restrictions and COVID-19 outbreaks are more at risk of default than those in regions that escaped the worst of Delta outbreaks.

Merrylands and Guildford in Western Sydney are the regions where the probability of default is highest, followed by Coolangatta and the northern Gold Coast in Queensland. 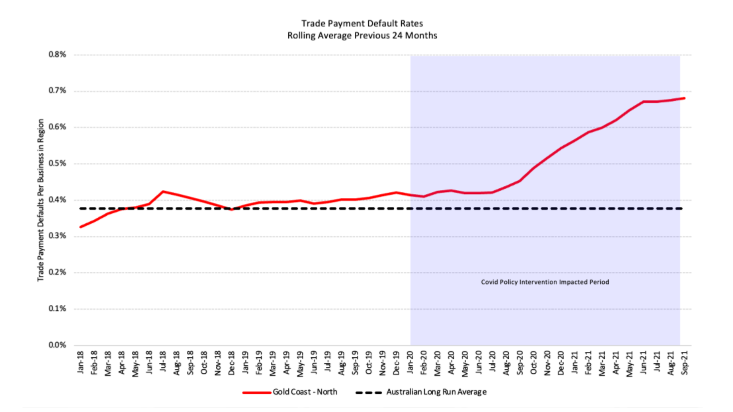 Businesses located in the Grampians and Swan Hill in Victoria and the Limestone Coast and Eyre Peninsula in South Australia have the least chance of defaulting on payments, according to the index.

Patrick Coghlan, chief executive of CreditorWatch said the Business Risk Index is an “important barometer” of the nation’s economic health as we navigate bumpy economic conditions.

“This is the first time forward-looking insolvency risk has been measured in this way,” he said.

CreditorWatch calibrates the index using data from about 1.1 million ASIC-registered, credit active businesses and combines the insights with its internal proprietary data.

Businesses in the hospitality and arts and recreation industries ranked the highest for probability of default as lockdowns directly affect their ability to operate.

In fact, 5.9% of hospitality businesses are potential defaulters, in contrast to 4.3% of arts and recreation businesses.

The Business Risk Index also ranks the sectors where businesses are most behind in payments.

With COVID-19 shutdowns of the construction sector occurring in multiple states, 12.4% of construction businesses are in arrears by 60 days or more.

Tailing construction firms are businesses in the hospitality industry, with more than 10% behind on payments.

Harley Dale, chief economist at CreditorWatch, said payment arrears in the construction industry are significantly higher than any other industry.

“Unsurprisingly, the accommodation, food and beverage industry scores the silver medal at 11.1 per cent,” he said.

External administrations declined by 23% in the September 2021 quarter, however, CreditorWatch expects them to rise post lockdown.

The overall outlook for the national economy, according to CreditorWatch, is that it is in a state of flux.

“While this week’s re-opening of the NSW economy is a positive step forward, it will only be when Victoria exits lockdowns and borders re-open between states and internationally that any sustained recovery can begin,” Dale said.

Does the punishment fit the crime? Five major implications of shutting down the entire construction industry

Leonie Akhidenor acknowledges the fortune of the construction sector, but says shutting down an entire industry overnight feels drastic. Here's why.

Victorian construction protests and shutdown “cause chaos” for small businesses

The two-week shutdown of construction sites in parts of Victoria is causing “chaos” and frustration for small business owners.