Aussie farmer calls on Coles and Woolies to do more to support producers doing it tough as petition ropes in 53,000 supporters 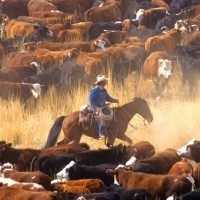 Major supermarkets such as Coles and Woolworths should be doing more to support drought-hit farmers, according to a cattle producer from regional Queensland.

Jack Neilson has called on the big supermarkets to start a “dollar for drought” campaign where customers would be asked at the checkout whether they would like to donate $1 to assist farmers and producers doing it tough.

Neilson’s Change.org petition has so far garnered more than 53,000 supporters, while his original Facebook post calling for the initiative has been shared more than 8000 times.

“It’s the worst drought on record out there,” Neilson says in his Change.org petition, which is also directed to federal agriculture minister Barnaby Joyce.

“Unless we get more help, our families and local businesses will collapse. My family’s forked out so much to feed our cattle, but our finances have dried up with this cruel drought – I just don’t know how much more we can take. Our livestock are dying and everyone is desperate.”

Neilson says the major supermarkets have spoken to the media about how they are supporting local growers and producers, but the industry needs more help.

“To put food on the table, and help us hold off the banks from repossessing our properties. Coles and Woolworths, we need you to back us farmers.”

Both Coles and Woolworths allow customers to make donations at self-serve checkouts in stores, however supermarkets need to partner with registered charities in order to collect donations.

One registered charity set up to tackle drought affected communities is the Western Queensland Drought Appeal.

A spokesperson for Coles told SmartCompany the supermarket will consider any proposals to support additional charities in the New Year.

From this month through to November, Coles is matching every dollar donated at its registers to Bravery Trust, an organisation that supports Australian veterans and their families.

From late November through to December, Coles will be encouraging customers to donate money to Redkite, an organisation set up to assist young people with cancer.

“Over the past financial year, our direct community investment was $36.5 million and an additional $7.2 million was contributed by customers, team members and suppliers.”

SmartCompany understands Woolworths has been in contact with Neilson regarding his campaign and has suggested to him cash donations for drought-affected communities should be handled by a registered charity rather than Woolworths directly.

In response to the petition, Woolworths has asked the Salvation Army to feed donations given to it by its customers at the checkout to drought-affected communities for the month of October.

“Since 2007, Woolworths has contributed almost $20 million to help drought-affected farmers and communities through Woolworths drought appeals,” the Woolworths spokesperson said in a statement.

“Last year Woolworths’ drought appeal contributed more than $950,000, which was distributed to drought affected farmers through our partner, The Salvation Army.”

SmartCompany contacted Jack Neilson and Barnaby Joyce but did not receive a response prior to publication.