Australian businesses are paying their bills faster than ever

Australian businesses are settling their invoices in an average of 44.8 days, continuing a two-year trend of historically low payment times.

Read more: Improve your cashflow by issuing invoices on the run

Average payment times for Australian firms have declined markedly since the second quarter of 2014, when invoices were being settled in an average of more than 55 days.

However, the Dun & Bradstreet data shows New Zealand firms continue to pay their bills at a faster rate, at a national average of 34.9 days. The time it takes to settle an invoice varies between Australian states and territories, and between industries. 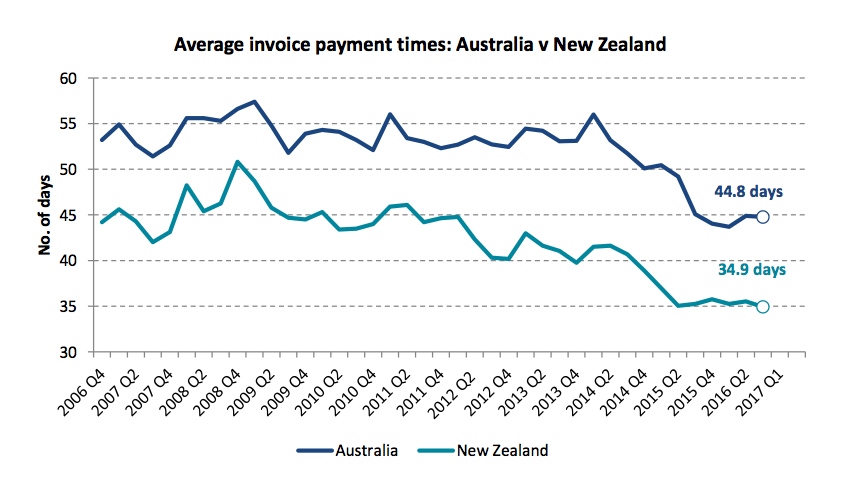 Tasmanian and Northern Territory firms are the fastest to settle their bills, with an average for the September quarter of 42 days and 42.1 days, respectively.

Firms in South Australia and Queensland are, on average, paying their bills in 43 days, while Victorian businesses are paying in 44.9 days.

The Australian Capital Territory is the slowest paying region, with bills in the state being paid, on average, in 51 days.

Stephen Koukoulas, economic advisor to Dun & Bradstreet, told SmartCompany the discrepancies between the states and territories are likely linked to trends in the broader economic cycle, with factors such as fluctuations in commodity prices and consumer spending patterns more important to businesses in some states over others.

As to why payment times in the ACT are traditionally longer than other states, Koukoulas says this can be attributed to the concentration of government departments in the territory.

“The government is the slowest payer,” he says.

“It’s very hard to chase up a government department … although they have got the money and usually always pay.” 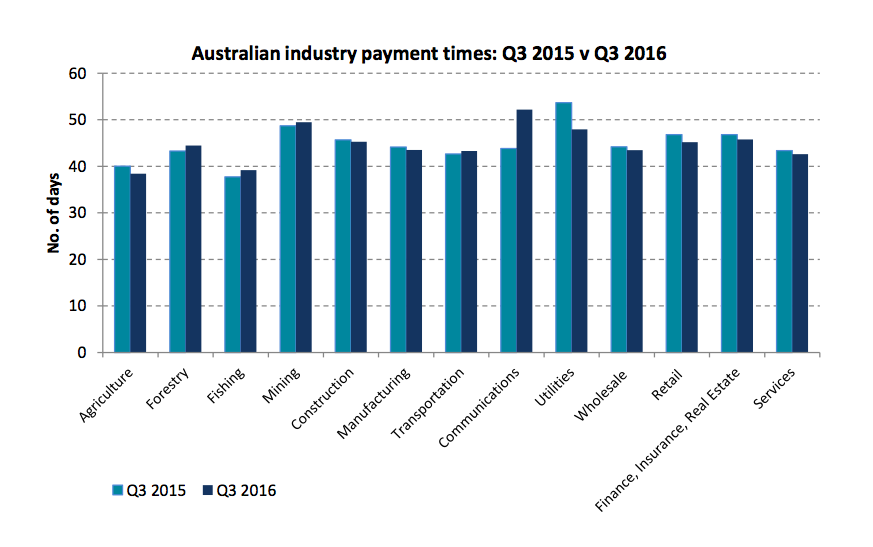 According to the Dun & Bradsteet analysis, the vast majority of invoices are paid by Australian firms within 30 days, with 72% of all invoices falling into this category for the September quarter.

Twenty-four percent of invoices were settled within 31 to 60 days, while 8% of invoices went unpaid for more than 61 days and 1% were still not paid after 121 days.

“One of the things the trade payments analysis tries to capture is if firms have plenty of cash, and they are feeling confident about the economy, they tend to pay more quickly,” Koukoulas says.

“If they are having troubles or are less confident, of course they tend to be slower to make payments.

“This drop that we’ve seen since 2014, and it staying low, is a reflection that things are fairly healthy,” he adds.

The suggestion that confidence among Australian businesses is improving is also supported by findings from the latest Sensis Business Index, released today. While the survey of 1000 SMEs showed a dip in confidence for the September quarter, off the back of a five-year high reading last quarter, the index is sitting at 11 points higher than the same time last year.

The index’s 12-month outlook for the economy also rose to a reading of +5, increasing by eight points from last quarter and recording the second positive score since December 2014.

While members of the small business community have recently reported instances of large corporates, including supermarkets and food producers, extending their payment terms, the Dun & Bradstreet analysis only captures the time at which payments are made, as opposed to how long firms have to pay the bills.

That being said, Koukoulas says the trend towards payments being made more quickly still points to businesses “feeling reasonably confident with cashflow”, particularly if their payment terms would allow for them to wait longer to pay their bills.

“They’re wanting to clear out debts,” he says.

“But if the economy were to soften or they need to hold on to cash, they could extend it.”

The Dun & Bradstreet figures also capture businesses of all sizes. Given large firms deal with larger volumes of invoices, compared to small businesses, this means the data is skewed towards the bigger companies.

There’s conflicting data on the issue of late payment of SME invoices. D&B data suggests that on average payment times are improving for SMEs which is good news but as all SMEs know it just takes one big invoice being paid late to cause havoc with your cash flow.