Diary of an entrepreneur: Why the odds are stacked in Punters’ Luc Pettett’s favour 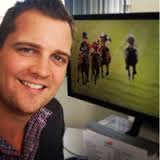 Luc Pettett has never been afraid to try different things.

His answer to the challenge was to experiment with sleep intervals.

Every 90 minutes Pettett would wake up, do some code, then go back to sleep for another 90 minutes.

“I was really pushing myself,” he says.

“I knew I didn’t want to be another cog in the wheel.”

It wasn’t the first time Pettett had thrown himself head first into an adventure and it wouldn’t be the last.

Before his move to the UK, Pettett had been working at a racetrack in Brisbane, something he’d fallen into thanks to the father of a girlfriend at the time.

“I knew nothing about horses, I didn’t even know how to read a form guide,” he laughs.

So Pettett learned what he needed to know and launched the first iteration of Punters – a blog about horse racing named Punters Paradise – in 2008.

After a change of tack, location and a name change, Punters has now grown into a network of sports and betting sites – including Punters.com.au and bookmaker comparison site BestOdds.com.au – supported solely through advertising.

The company has grown by 93% over the last three years and turns over more than $3.1 million annually.

Last month, the company took out number 26 in our 2014 Smart50 list of fastest growing companies.

That same night, Pettett embarked on his latest undertaking – being the proud father of a new born baby girl named Bella.

Pettett sits down with SmartCompany to talk about the racing industry, the benefits of workplace scrums and why he thinks even the most effective leader is challenged when a newborn baby enters the picture.

From poached eggs to kale smoothies – Pettett says he always has a big breakfast.

Pettett makes time each morning to watch the news on Al Jazeera.

“I like to see what’s happening in other countries, I think it’s important to have a holistic view, especially in my industry.”

Pettett recognises there are some negative issues within the betting industry, but as a punter himself, he believes it’s all about control and reaching out to the available resources if there is a problem.

The horse racing industry is one that Pettett says he is proud to be a part of, telling SmartCompany the glamour and the passion portrayed by the sport is truly authentic, and the horses are very well cared for.

It only takes Pettett three minutes or “not even a whole song on my iPod” to get to work, as he lives around the corner from the Punters office in the Melbourne CBD.

At 9.15am each morning, the whole office has a “scrum” – a casual meet-up where team members talk about what they are going to work on that day.

Pettett highly recommends scrums as a management tool and says although the idea originated from the tech industry, scrums have caught on across a range of sectors.

He says it’s particularly helpful to encourage workers with technical ability, such as developers, to communicate their ideas and work with the rest of the team.

“They have to have a conversation as if they’re around the coffee machine, it’s great.”

For Pettett, his development and graphics team are the most important part of the business.

He sits down with his graphic designer – a role so important to him, he interviewed 15 candidates before finding the right person – each day to go through every screen a user might come across on the site.

“I want to make sure every new feature is 100% designed… It shapes our business. If you haven’t got a great product you’ll die off,” he says.

Pettett says while maintaining a work/life balance is challenging, he doesn’t find it too difficult given his “very supportive and very patient partner”.

He’s been able to take a small step back from the company knowing he can rely on his staff, but says he faces a new challenge in his latest leadership role.

“As a leader, you think you’re pretty effective at everything. When a kid comes along you realise you’ve got so much more to learn about everything,” he laughs.

The family have recently signed up to food service named Your Private Chef, which delivers five main meals a week, and Pettett says the time they save from cooking their own meals is worth much more to them than the cost of the service.

“One piece of advice I once received was, you should never do anything that you can get someone else to do for you cheaper,” he says.

In his down time, you’ll likely find Pettett spending time with his wife, watching a TED talk and, of course, watching the races.

Pettett recently told SmartCompany about his humble ambitions to become “the Google of horse racing”.

“If you look at Google and their vision to organise the world’s information, we want to bring the same vision to the racing experience. We want to be the branding for horse racing,” he says.

But while he may have the blinders on with Punters, Pettett says he doesn’t necessarily want to have “tunnel vision” in his career.

“I don’t want to be really good at just horse racing,” he says.

“At some point, I’ll want to try something new.”