Employees at 12 more Dick Smith stores have been put out of their misery after receivers Ferrier Hodgson unveiled another round of store closures.

Stores in Doncaster and Wangaratta in Victoria and Armadale in Western Australia, along with outlets in eight other locations, will close on April 20.

The Dick Smith store in South Hedland in WA, meanwhile, will shut its doors for the final time on April 19. 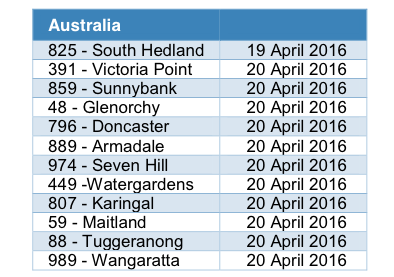 The Dick Smith stores that will soon close.

It is now the fifth week of the controlled closure process at the collapsed electronic retail chain. At the end of March, receivers Ferrier Hodgson revealed 22 stores will close on April 16, with nine stores in New Zealand to close on April 9.

All stores are expected to close in the next three weeks or so.

Dick Smith staff have previously expressed their frustration at having to wait to find out when their particular stores will close as they have to work right up to the closure date if they wish to receive any outstanding entitlements – but this makes it difficult to apply for other jobs in the meantime.