A different Christmas: How COVID-19 could take ham off our tables

If you like a traditional Christmas, complete with ham and/or lamb, look out. The wrenching effects of the COVID-19 pandemic on global supply chains and local workforces mean December 25 could look a little different this year.

“They have said it all comes down to labour, if they can’t be certain they have the labour, they can’t forecast to meet the Christmas ham demand.”

One supermarket boss has taken to speaking out. Fred Harrison, CEO of independent supermarket chain Ritchies, has been using media to warn of rising prices in local meat and imported goods.

“The cost to import has gone through the roof ,” he told Channel 7.

In contrast to Ritchies, the big two supermarkets are claiming everything will be fine. Is that because they have diverse supplier relations and actually can guarantee good supply? Or is it because they understand the dampening effect on customer footfall of proclaiming in advance your shelves will be bare?

Only Christmas shopping season will reveal the truth.

While the major supermarkets put on a brave face, industry groups are making noise.

Meat and Livestock Australia is warning that restrictions in Victoria will mean lamb can’t be processed, with a processing shortfall of at least 250,000 animals, possibly more if this lamb season turns out to be a strong one. Wonderful news for the lambs themselves who get to gambol around the paddocks a while longer. Bad news for farmers and for Christmas dinners.

Victoria does 50% of all Australian lamb processing, but is operating at reduced capacity due to lockdowns. We know meat processors are prone to viral outbreaks and as the delta strain spreads wider, it is reasonable to expect some plants to have interrupted work. Lamb prices reflect this, hitting record highs in some categories.

Beef prices are also at heady highs. The Eastern Young Cattle Indicator – a price index for Aussie beef — finished 2020 at high levels and has only climbed further in 2021. As the next graph shows, beef is now at over $10/kg. In 2019 it was closer to $3/kg. 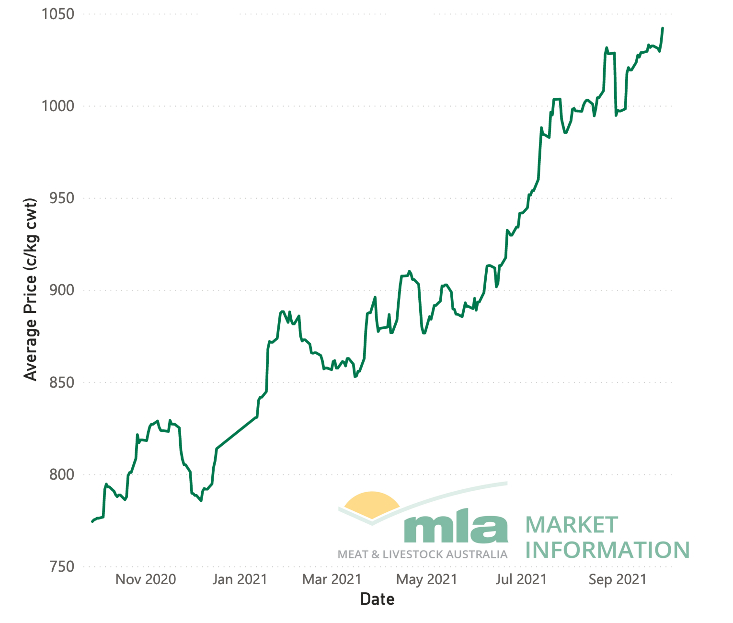 Even if you can lay your hands on locally produced meats, there could be other problems at Christmas time. It might be French wines and Chinese toys that run out instead. Importing is getting particularly tricky, with hold ups at ports around the world.

The cost of sending a shipping container around the world has gone absolutely crazy. It cost about $1300 last year, now it costs almost $11,000 as the next graph shows. 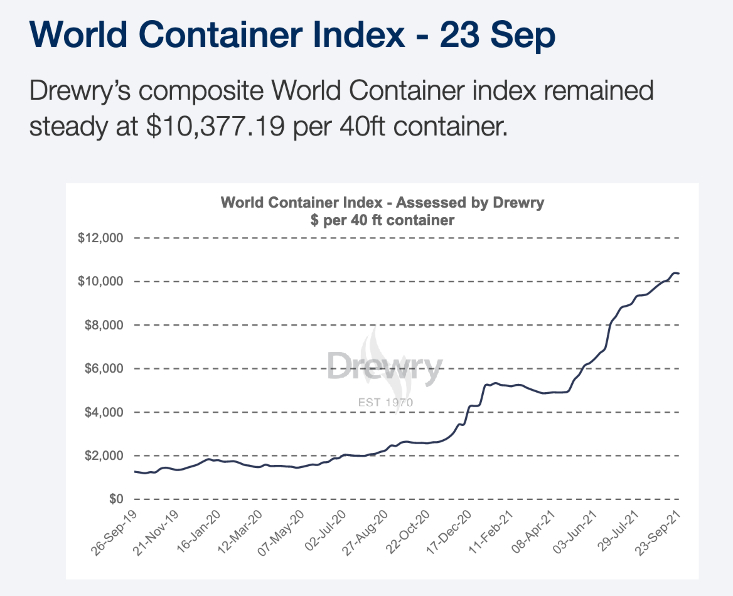 Low-cost goods that fill up a container fast – like cheap plastic toys and Christmas crackers –  might well get bumped at these prices.

Ships are stuck waiting at ports all over the world; 70 ships are moored off Los Angeles, for example. Shipping line Maersk says its containers are getting held up in ports, meaning there are too few empty containers in the places they are needed.

“Continued strong demand, coupled with network disruptions has hammered our schedule reliability,” it wrote in a note to clients in late September.

With the prospect of absent family, lingering lockdowns and missing trimmings, Christmas 2021 is shaping up to be a grim one.

Why is shipping to Australia taking so long, and what can SMEs do about it?

We asked maritime law expert Alison Cusack what's going on with shipping, and whether there's anything small business owners can do.

Global and domestic disruption to shipping has left some small businesses facing the upcoming Christmas period with little to sell.