Why 2019 could be the year of another tech bubble burst

When the dot-com bubble burst in 2000 it sent significant numbers of businesses to the wall. Investment banks had been encouraging enormous investment in dot-com ventures by launching Initial Public Offers (IPOs), allowing investors and entrepreneurs to cash in on vast fortunes by selling off shares in their companies.

Most of the dot-coms which listed on stock exchanges had done little more than consume vast amounts of investor cash and showed little prospect of achieving a profit. Traditional metrics of performance were overlooked and big spending was seen as a sign of rapid progress.

The cash burn was to build branding and create network effects — where something gains more value the more people use it. These are the main driver of platform businesses. With Amazon, for example, the more suppliers the greater benefit to potential customers and vice versa. Together, this would build the foundation for future profits on the assumption that the underlying business case was sound. Most were not — and yet almost any idea attracted large amounts of funding. 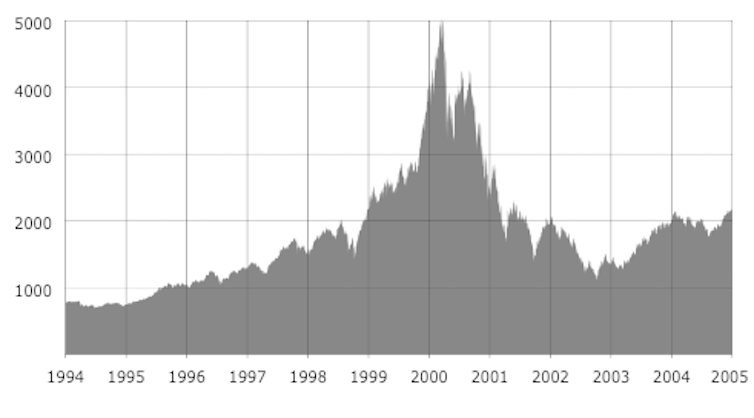 The NASDAQ Composite index from 1994 to 2005, showing the peak in early 2000 that coincides with the dot-com bust.

Fast-forward 19 years and, following a similar ‘app’ boom, investment banks are bringing forward IPOs as they foresee volatile market conditions arriving later in the year. Ride-hailing apps Uber and Lyft, respectively valued by investment banks at US$120 billion and US$15 billion, are to be placed in early 2019 to beat the collapse. Both are loss makers — with Uber’s losses approaching US$4 billion in 2018 after a US$4.5 billion loss in 2017. Traditional metrics have been ignored and user growth taken as a proxy for future profitability. But this requires an enormous leap of faith.

Uber, like many, has been able to tap readily available funds and has raised more than US$22 billion from investors so far. The problem with being able to raise funds so readily is that it discourages focus and efficiency. Uber is not only developing the ride-hailing model but also bike sharing, takeaway food delivery and autonomous vehicles. The latter is also being developed by most of the major car manufacturers, as well as Google.

Snap Inc, owner of social media app Snapchat, is also on the rocks, as it is rapidly running out of funds — despite its US$24 billion listing in 2017. The shareholders are powerless to intervene, as only founder shares have voting rights. LinkedIn is still losing money after its US$26 billion purchase by Microsoft. Twitter has just made a small profit for the first time, following adoption as US president Donald Trump’s main channel for US policy announcements.

The investment bank belief is that network effects will build scale economies and create ‘winner-takes-all’ markets that emulate Facebook, Google and Amazon. But the reality is far from the truth, as most differ in several important aspects.

Most apps fall into two categories. There are those that use content to attract users in anticipation that these users can be monetised — typically by selling advertising or collecting subscriptions. These include the likes of LinkedIn, Twitter, Snapchat and Facebook. Then there are those that provide a service or goods, such as Uber, Lyft, Deliveroo and Amazon.

Apps using content have found that content can be enormously expensive to keep new and that monetising users is difficult in terms of attracting advertising or subscriptions. Investor funds are used to develop content in the hope of creating enough users to pay for it and eventually show a profit. The reality is that users tend to move onto the next fad before they can be monetised.

Where goods and services are concerned, investor funds are used to prime the market through advertising and subsidising prices to both suppliers and customers. In effect, they are trying to create network effects, which are anticipated to persist once the low price incentives are withdrawn.

But this is the equivalent of paying suppliers more than the market rate and then selling to customers at less than the market rate. In markets with low switching costs such as ride-hailing apps and food delivery, users will simply revert to the most competitive offering once the incentives are withdrawn.

In the case of Uber, despite an impending IPO, it has been unable to withdraw costly incentives due to user growth collapsing. Scale economies are also rather limited, as Uber is finding when trying to withdraw driver incentives which has resulted in strikes. In effect, the model only works with incentives, which investors are needed to fund.

The big difference with Facebook, Amazon, and Google is that they were among the very first to build network effects. Uber has faced sustained competition and staunch resistance around the world, resulting in enormous battles of attrition funded by investors. Snapchat have found Instagram and WhatsApp (both owned by Facebook) waiting for them, making the competition for users very difficult.

It’s only a matter of time before the app bubble bursts. Big tech companies such as Apple and Facebook’s shares have fallen almost 40% in the past few weeks — which is indicative of markets losing faith in even the established tech businesses to achieve their forecasts. This does not bode well for the apps which have not yet listed. When it comes to investment markets, history does repeat itself again and again and again.

NOW READ: Buzinga to Appster: An insider’s theory on why the app giants keep falling