Aussie businesses are hiring again, but who’s taking the jobs?

I’ve never seen so many of them. Signs everywhere, telling us what’s happening in the economy. Above is one I saw in Melbourne this week.

Restaurants are advertising for staff in their front windows all over the place. Even though there are still a lot of vacant shopfronts for lease, the businesses that survived 2020 seem to be hiring. I’m seeing far more of these ads than I would usually, and some go so far as to specify no experience required — which is a concrete sign that the jobs market, which was hit hard by COVID, is getting tighter again.

You shouldn’t trust your eyes alone, of course. Anecdote and observation can be skewed. But the data backs up observation in this case.

According to the federal government’s labour market data, job ads soared in March and rose further in April — to their highest level since the extremely strong economy we had just before the GFC. 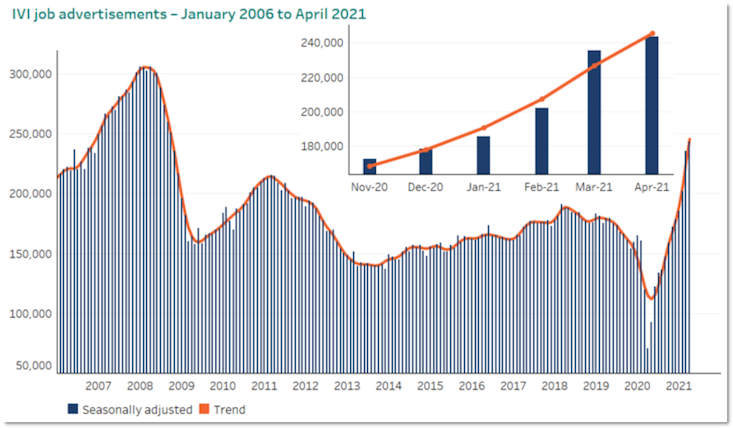 We can see the strength in the official unemployment rate too. Down to 5.5% in April, the Australian Bureau of Statistics (ABS) confirms, as the economy appears to shrug off the end of JobKeeper.

JobKeeper ended in March. I’m guilty of forecasting that its conclusion was going to be a terrible blow. And yes, jobs were lost. Part-time employment fell by 65,000 in April. But full-time employment rose by 34,000.

It’s not a terrible result. With job ads so high, the jobless can have some hope. Being jobless in an environment where hiring is strong is a different, much less hopeless, situation than being jobless when nobody is hiring.

In March, nearly 800,000 Australian were unemployed. By April, 22% of them moved into jobs. Not bad at all! (Please don’t misunderstand what I’m saying here: net unemployment didn’t drop by 22%. It dropped by 4%. But the people who are unemployed in April are not the same as those in March. A lot of the newly unemployed will be jobless for only a short stint. The point is, hiring is strong. Being unemployed need not be a long-term proposition now.)

For a long time, the Coalition couldn’t shake off the Costello legacy of fiscal prudence. It talked a big game on tight budgets — even when it wasn’t actually delivering them. The problem was stingy fiscal policy wasn’t delivering the ‘jobs and growth’ that formed the other leg of its rhetorical strategy.

The pandemic delivered a crash course to Josh Frydenberg and Scott Morrison on the importance of government spending in bringing the unemployment rate down. The latest budget shows they were paying attention. It is a spending budget. The government has been rabbiting on about jobs and growth for ages — now it has finally unleashed the one policy that can make those things happen.

As they say in US politics: “It’s the economy, stupid.”

Morrison would love to be able to point at a record low unemployment rate on the campaign trail. Don’t expect tough budgets until after the next election.

Who serves our food?

The signs in restaurant windows are a particularly interesting phenomenon. The hospitality industry is desperate for staff because it is staffed disproportionately by visitors to Australia. As the next chart shows, about 15% of food and hospitality workers are visa holders of some kind (and this counts only those staff who are on the books). 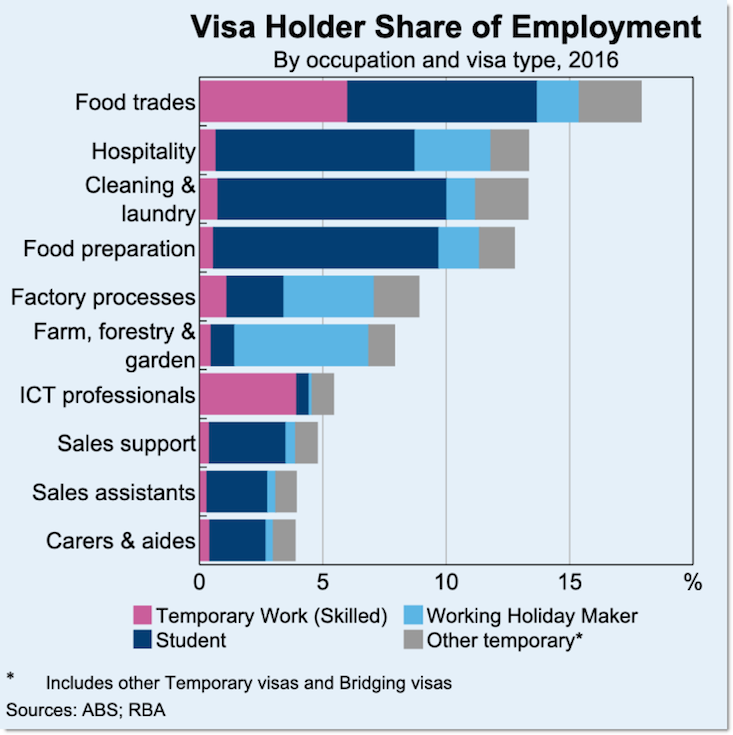 Australia has far fewer visa-holding visitors now because of its closed borders — that means more Australians working in restaurants. The number of potatoes being peeled by Australians in commercial kitchens has probably never been higher.

One thing restaurants are likely to find is that when you employ Australians you need to pay more. So it’s interesting that this sector has had the highest wage rises over the recent quarter. (Albeit this is affected by the Fair Work Commission decision to finally bring through award wages increases that were originally scheduled for last year. What’s more, hospitality businesses might actually be paying the award a bit more if they’re employing Australians.) 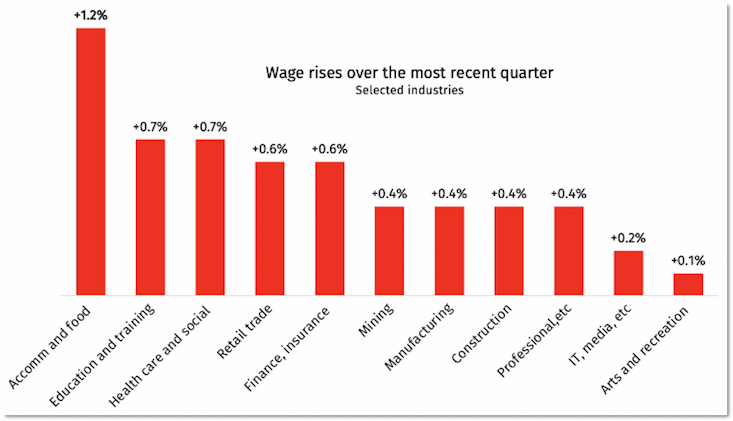 But even if the desperation for hiring is particularly noticeable in the hospitality sector, the improvement in the labour force overall is gladdening. The numbers are amazing. Job ads are 43% higher in Victoria than pre-COVID.

This is one hell of a recovery. It’s a testament to the power of fiscal policy and a massive black eye to the idea of austerity.

Under changes announced in yesterday's state budget, businesses in Victoria with payrolls of more than $10 million will have to pay an additional payroll tax surcharge.

Plus exclusiveUndercover boss: How to mystery shop your business to improve results