A new report on global wealth has ranked Australia highly, but also revealed we are descending deeper into debt.

The average Australian adult has $US375,573 ($504,246) of wealth, according to Swiss bank Credit Suisse, which has published its annual wealth report.

Upbeat about Australia, Credit Suisse described our overall position as “still resilient”, our level of wealth inequality as “relatively low”, and forecast that our wealth would grow by 34% over the next five years. 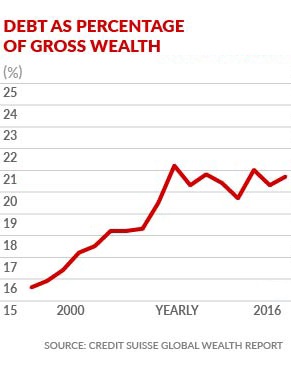 But the report also provided a snapshot of Australia’s worsening household debt, which The New Daily has reported on previously (here, here, here and here).

In 2016, Australian debt per adult increased to $US98,004, up from $US97,189 the year before, while wealth per adult went backwards, Credit Suisse reported.

But the long-term trend seems to be towards greater indebtedness.

Since the year 2000, average debt quadrupled, but average wealth increased only two-and-a-half times.

Earlier in November, Governor Philip Lowe said Australia’s debt-to-income ratio was the worst it has ever been.

“Currently, household debt is equivalent to 185% of annual household disposable income, a record high and up from around 70% in the early 1990s,” the Governor said.

“We can never know with certainty exactly what level of debt is sustainable. It depends on income growth, lending standards and asset prices. But it surely must be the case that the higher is the debt, the greater is the risk.”

By risk, the RBA governor meant that more indebted Australian households are less able to spend the nation out of another financial crisis.

The other concern is that deeply indebted households will suffer when the Reserve Bank does eventually, and inevitably, start lifting the record-low official interest rate target.