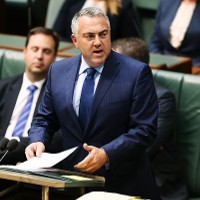 Paid parental leave will be a key budget talking point again this year, with Treasurer Joe Hockey announcing over the weekend the government will attempt to crack down on parents who “double dip” on paid leave from both their employers and the government.

The Coalition dumped its “signature” paid parental leave scheme from last year’s budget in February amid growing opposition to the multi-billion dollar scheme.

On Sunday, Hockey revealed almost 80,000 new mothers will lose access to some or all of the federal government’s existing paid parental leave scheme from July 2016, reports Fairfax.

The scheme currently provides $11,500 to new mothers, made up of 18 weeks of leave at the minimum wage for primary care givers earning $150,000 or less a year.

However, some parents are also able to access paid parental leave from their employer if the organisation they work for has a scheme in place. The government wants to make sure workers cannot “double dip” by accessing both schemes.

“We are going to stop that,” Hockey said in an interview on Channel Nine.

“You cannot get both parental leave from your employer and from taxpayers.”

According to Fairfax, more than 50% of new mothers, or around 90,000 women a year, will not be affected by the change as their employers do not provide paid parental leave.

Hockey said the change would save close to $1 billion over four years, but Kate Carnell, chief executive of the Australian Chamber of Commerce and Industry, told the Guardian some employers may choose to cease their schemes if the government goes ahead with its plans. This could jeopardise the government’s ability to reach that level of savings.

“It’s hard to see why employers would continue to pay parental leave if it meant the government stopped paying and they were simply footing the bill for the government,” Carnell said.

“It seems likely employers and employees would look for other benefits that suit them, if this meant the government still paid the parental leave bill and the employer payments continued to be in addition to it.”

However, Peter Strong, executive director of the Council of Small Business of Australia, told SmartCompany this morning he estimates less than 1% of small businesses currently offer employees paid parental leave.

While Strong says it would be up to individual employers whether to change any existing leave schemes they offer new parents, he is concerned multiple workplace policies for parents are creating a “two-tier workplace relations system”.

Strong says paid parental leave is just one part of a wider policy issue, which also includes investment in childcare services and different rules for which businesses have to pay fringe benefits tax on childcare and health services for employees.

Social Services Minister Scott Morrison announced last week the government will invest in childcare by providing an additional $327.7 million over four years through a Child Care Safety Net, which will be designed to provide financial support to disadvantaged and vulnerable families.

The package will include a revamped Child Care Subsidy, which the government will seek to introduce from July 1, 2017.

The subsidy will be on a sliding scale that depends on a household’s combined income. For households with incomes of up to approximately $65,000, the subsidy will be 85% per child of the actual child care fee or the benchmark price, whichever is lower. This will drop to 50% for incomes of approximately $170,000 and above, while those with incomes under $185,000 will no longer have a cap on the subsidy they can receive.

As part of the plan, the government will abolish the current Child Care Benefit, Child Care Rebate and Jobs, Education and Training Child Care Fee Assistance programs in favour of the single, means-tested subsidy.

But the package is contingent upon the government being able to pass measures included in last year’s budget that would stop payments under the Family Tax Benefits scheme to single-income families with children under the age of six.