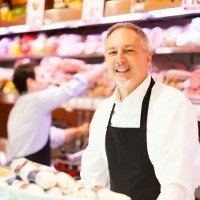 Small businesses are among the winners in this budget

Treasurer Joe Hockey handed down a budget last night he claimed was “responsible, measured and fair”.

But while there were gains for some in the 2015 budget, there were also cuts to others. Here are this year’s budget winners and losers:

The budget pegs Australia’s economic fortunes on “turning small business into big business” and to do that there’s a 1.5% tax cut for all small companies with annual turnover of under $2 million and a 5% “tax discount” for small unincorporated businesses capped at $1000 per individual.

Cash registers will be ringing around the country as small business owners and anyone with an ABN stocks up on laptops, phones and cars now they can instantly write-off any business asset purchased for less than $20,000.

3. Retirees with loads of superannuation

“I want to assure all Australian workers that they can have confidence in their retirement plans,” Treasurer Joe Hockey said in his budget speech.

“There will be no new taxes on superannuation under this government”.

The government has allocated an additional $3.5 billion to reform Australia’s childcare system in this year’s budget including a revamped Child Care Subsidy and a Child Care Safety Net designed to provide financial support to disadvantaged and vulnerable families.

West Australians scored a $499 million payment to be spent on nine infrastructure projects while Northern Australians got a concessional loan facility of up to $5 billion, to cost the government $800 million over three years.

The government is expecting to save $1 billion by stopping “double dipping” into government and employer parental leave.

A so-called “Netflix tax” will add GST to digital downloads and means that House of Cards episode or iTunes purchase will be more expensive from July 1, 2017.

The budget changes aged pension eligibility so from January 1, 2017, the asset test taper rate will increase from $1.50 to $3 so for every $1000 of assets over the asset-free threshold the pension rate will reduce by $3 a fortnight.

The government claims in a “worst case scenario” this means a 1.8% annual drawdown by pensioners on their assets.

It’s not all bad news for pensioners though. The asset-free area for pensioners will increase, which the government says will allow around 170,000 pensioners “with moderate assets” to receive a full or increased pension.

A tightened activity test is aimed to stop people not working, studying or seeking working from receiving childcare benefits.