David Murray warns Australia’s AAA rating is at risk: Is it really? 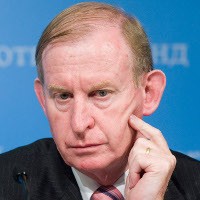 “We don’t have a problem right now… there is zero chance of government losing AAA rating because of the upcoming federal budget.”

The comments come in response to Murray telling Fairfax the “deterioration” in the federal budget could result in the loss of the prestigious rating, which allows banks to access overseas capital and keeps their funding costs down.

“The AAA rating of the Commonwealth is looking increasingly vulnerable, with little room to move,” Murray said.

“Once the banks fall in under a lower rating, that should be causing a rethinking of their position.”

A report by Deustche Bank says Australia could face deficits until the 2023-24 financial year – Treasurer Joe Hockey told the ABC this morning he’s not “putting a timeline” on when the budget returns to surplus.

Hogan says if the banks lose their AAA rating, then SMEs would have to access funding at a higher cost.

“(The) idea is similar to the credit issue.”

“That’s not significant because there is liquidity in global markets,” Hogan says, referring to low interest rates set by central banks around the world and low rates of inflation.

However, Hogan says the lack of diversification in Australia’s economy is cause for concern.

“If the issue (lack of diversification) is not addressed, the rating could come under pressure earlier than it would for other economies,” Hogan says.

Hogan points to economies such as the United Kingdom and Germany as having more diverse streams of revenue compared to Australia.

Hogan says there is no housing bubble in Australia – instead there are “hot spots” in Sydney and Melbourne driving prices up.

“It’s always been expensive for young people to get into the market”, Hogan says, and has been for the past 30 years.

With the Reserve Bank Board due to meet next week, RBA governor Glenn Stevens told The Australian Financial Review’s Banking and Wealth Summit the Australian central bank is worried that low rates are taking cash away from retirees.

“Just about everywhere in the world the price of buying a given annual flow of future income has gone up a lot,” Stevens told the summit.