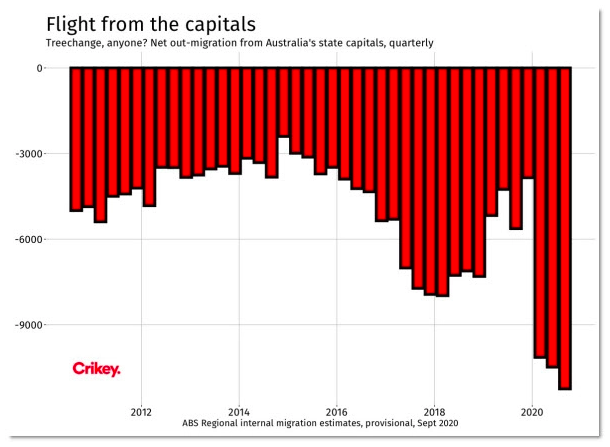 In the 1981 film Escape From New York, Kurt Russell plays a man trying to escape from a New York City that has been turned into a giant prison island. When I see the data on internal migration in Australia in 2020, the film springs to mind. Australians have been fleeing the city at never-before-seen levels, and naturally lockdowns are a big part of the explanation.

In 2020, anyone who could flee the cities did. Shout-out to all the beach-house-owning baby boomers posting their sea views on Facebook.

The largest moving part in the data is Melbourne. Usually a net attractor of internal migrants, the southern capital instead found itself disgorging residents at a rate of thousands per month. The war against the virus was not without collateral damage, and the status of Melbourne as a desirable place to live seems to have taken a hit.

Will this trend reverse as the vaccines begin to course their way through our veins? Much depends on whether working for home is here to stay or a passing fad. But for now, a lot of people are enjoying the wide open spaces.

Aussie alternative social media startup Litt has raised $1.5 million through equity crowdfunding — and broken a few records along the way.

Half-price flights to Tassie under new government scheme will be a boon to local small businesses, says SME advocate

The federal government has announced it will pay half the price of 800,000 airline tickets as part of a $1.2 billion tourism package.