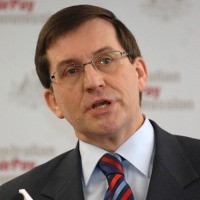 The Australian economy will grow by an additional 2.5% of gross domestic product over the next 10 years if all the recommendations of the ‘root and branch’ Harper Review are adopted by the federal government.

The final report of the review led by Professor Ian Harper will be released on Tuesday, with Harper telling The Australian today his panel has devised a “road map” to unlock the additional growth.

Once the report has been released, Small Business Minister Bruce Billson will lead an 8-10 week consultation over the review’s 56 recommendations.

As indicated in the draft report of the Harper Review, released in September, the review will recommend the government add an “effects test” in section 46 of the Competition and Consumer Act to prevent a business with substantial market power from acting in a way which lessens competition.

However, Harper told The Australian the recommendations will also include a “more definitive defence” to the effects test for the big end of town.

“The draft report includes the notion that there might be a couple of defences to that,” Harper said.

“There is now a more definitive defence.”

The draft report also recommended abolishing restrictions on retail trading hours and limits on parallel imports, and suggested the government should replace the National Competition Council with a new body, the Australian Council for Competition Policy.

But Peter Strong, executive director of the Council of Small Business of Australia, told SmartCompany COSBOA is “becoming sceptical” about the outcome of the review, admitting he was “quite concerned” about some of the recommendations in the draft report.

“I’m hoping what [Harper] says comes true, that we will see good competition that helps us grow,” Strong says.

Strong is particularly concerned about the inclusion of a “more definitive defence” to the effects tests, saying he hopes that “isn’t code for making sure the effects tests doesn’t exist in any real form”.

“The big end of town tend to over-react to something so simple as an effects test and economic rationalists tend to listen to people with the money rather than the majority,” he says.

But Strong says he is still hopeful the review will have a bigger impact on Australian competitiveness than the Hilmer Review 20 years ago, which he says had contributed to a decline in business productivity “because of the dominance of a few”.

“Hopefully [this review] means the innovators out there are able to innovate and Australian manufacturers are able to compete,” he says.

Strong is also hopeful the May budget will deliver for small business, despite time effectively running out for the federal government to pass any more of its measures from last year’s budget through Parliament.

According to Fairfax, measures worth a combined $27.6 billion that were included in last year’s budget have been abandoned, replaced with other policies or stalled in the Parliament.

Yesterday was the last sitting day of Parliament before this year’s budget and the government has not ruled out dropping or replacing some of the measures with alternative savings in May.

The legislated measures from last year’s budget are worth approximately $20 billion, while those that have been dropped include the paid parental leave scheme and the Medicare co-payment.

“The focus on small business this year is really good news,” Strong says, referring to the government’s plans to offer tax relief to all small businesses.

“We’re not going to get everything we want … but we are hoping for some real outcomes in the tax area and we’re looking at measures to promoting growth, including local economic development,” Strong says.

But Strong says the success of this year’s budget will depend on communication.

“Some might have to suffer in the short term but as long as everyone has a fair share of the pain, we will all gain in the long run.”