Rate rises or lower government spending: What path will Australia take to get out of inflation?

If there’s one thing people hate, it’s price rises. It’s like the universe is chiselling away at you, taking away what little gain you’ve achieved by hard work. The latest data — an astonishing 5.1% annual rate of consumer price inflation — represents millions of households shaking their heads in frustration.

There are two paths out of inflation: rate rises or lower government spending. The government just dropped a hefty budget full of goodies, which means rate rises are our last and best chance to stuff the inflation genie back in the bottle. The idea is that by cooling spending in the economy we reduce the big spending that makes retailers put up prices. Will this be fun? It will not.

The path out of pain goes through even more pain. Families who are already struggling with their cost of living are about to be whacked with higher interest rates on their mortgages.

Price rises have been uneven across the states. To our Perth readers, I’m sorry. This is not Zimbabwe but it’s not comfortable either. Perth inflation is driven by two things: petrol went up and the price of buying a newly built home is through the roof. (CPI doesn’t include sales of existing homes, but it does include the cost of new homes with the land aspect taken out. They justify this because you don’t consume the land; it’s an asset you sell later.) 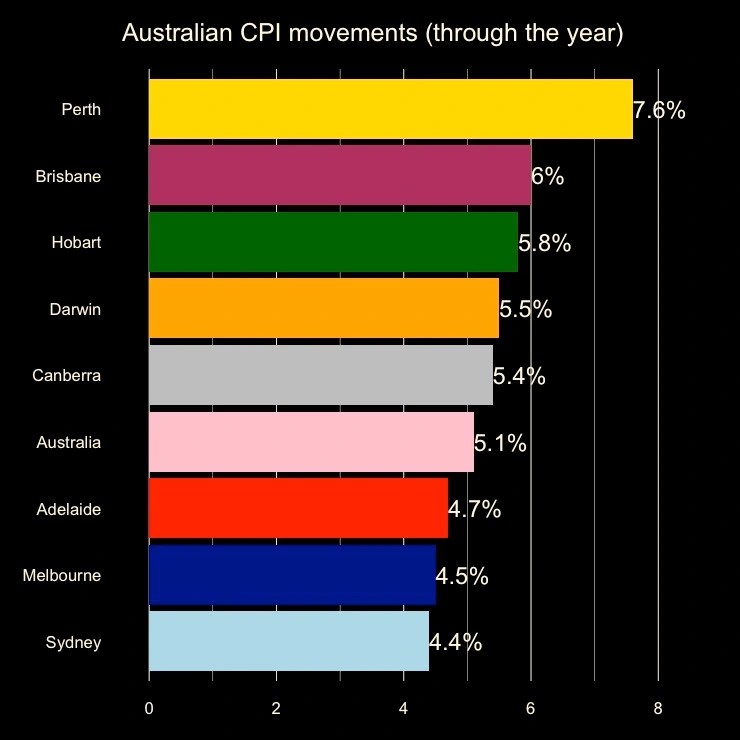 In the supermarket aisles, inflation is everywhere. The most recent quarter saw even more inflation in beef and veal, up 26% since 2019. Coffee also shot up in price, by 8%, after a long period of low price rises. Vegetables and lamb also rose alarmingly. Nothing you can eat or drink fell in price in the last quarter, although wine was stable, which might help some drown their sorrows.

Has anything fallen in price recently? Scant little, unfortunately. One exception is international travel. As planes began taking off again and hotels reopened, the price of travel began to fall. Other than that it’s mostly homewares, as the next chart shows. We can perhaps see the end of lockdowns and isolation in that — it is easy to imagine homewares stores extrapolating their strength of sales from the depths of the pandemic and now finding themselves with excess stock. Cheap furnishings, crockery and cutlery are on the market. 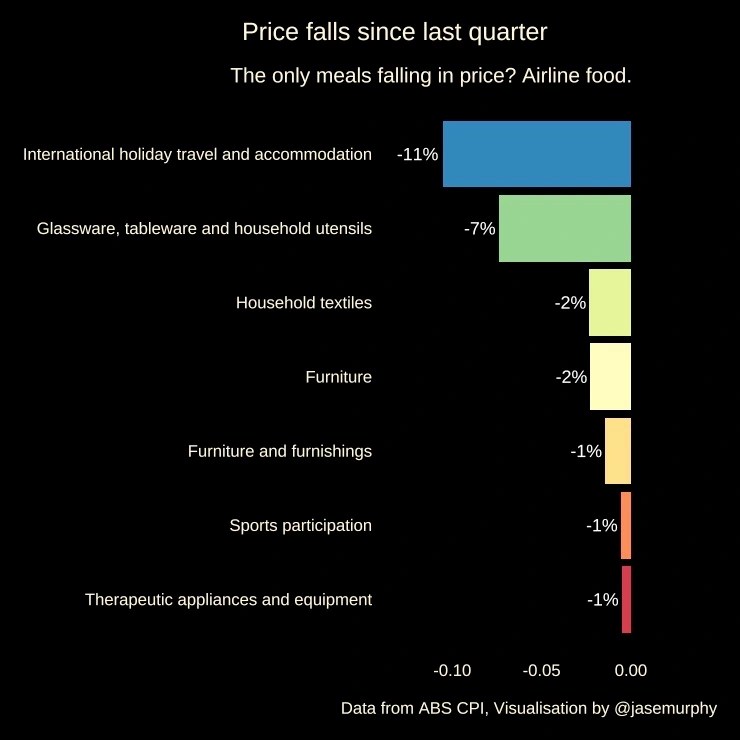 But nice cutlery and an overseas holiday are not going to make people feel better when houses, petrol and food are soaring. This coming election was already focused on the cost of living. Expect to hear about little else between now and polling day, because we could be set to have an interest rate hike during the election campaign, if market predictions of price rises are correct.

The market is even more confident of an interest rate hike when the RBA meets on May 3. Just six working days ago interest rates in September were expected to be 1.25%. That expectation has since shot up to 1.75%. That’s an extra half a percentage point on the official cash rate.

If banks pass a rate rise through — and we can expect them to pass it through at a velocity astrophysicists would be excited to measure — families need to find $165 extra a month on the average new Australian home loan of $595,000. Just what they need. In Sydney and Melbourne, where loans are higher, payments on loans will be higher.

The market now expects interest rates of 3.3%, not 3.5%, that in September 2023. That’s because rate hikes that come sooner should prevent the inflation that would cause rates to rise even higher. It shows the whole point of rate rises — pain now can reduce pain later.

But pain is going to come. And although the seeds for it were planted long ago, do not expect the government of the day — who it may be — to be spared blame.

This article was originally published by Crikey.

Inflation is now at 5.1%, so when will the Reserve Bank raise mortgage rates?

With the RBA cash rate at an all-time low, and an increasing risk that the current inflation will become embedded in expectations, an increase in rates is a matter of “when” not “if”.

Underlying inflation the highest it’s been since 2009 as CPI jumps to 5.1%

Inflation is climbing at an annual rate of 5.1%, according to the latest Consumer Price Index (CPI), up substantially from December's figure of 3.5%, as housing and fuel costs surge.