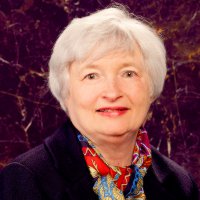 After the most public Fed chair nomination battle in recent history, President Obama has finally appointed Janet Yellen to replace Ben Bernanke when he retires from his position atop America’s central bank next year.

Yellen was the frontrunner ever since Larry Summers pulled his name out of the ring last month, and American markets rose on her appointment. She’s seen as a steady, safe pair of hands who will likely maintain many of the policies enacted under Bernanke.

She’s also the first woman to hold the role, and only the 17th woman to lead a central bank worldwide. Plenty of people say the American Fed is the most important economic decision-maker in the world, so that puts her in a pretty powerful position.

Here are five things you probably didn’t know about Yellen.

1. What’s she been doing lately?

Yellen’s been leading the Federal Reserve in some capacity or other since 2004. In a world with few high-ranking female economists, she’s been chair of the Council of Economic Advisers, an advisory body to the US President, and has been a professor of economics and management at Harvard University.

2. She’s one half of an economic power-couple

Yellen is married to Nobel-prize-winning economist George Akerlof, who got the award in 2001 for his work on a pretty seminal study showing how markets malfunction when buyers and sellers have different, asymmetric information.

3. Her first contribution to economic theory: It doesn’t pay to pay workers peanuts

Yellen’s doctorate, earned at Yale, developed what she called the “efficiency wage” model of unemployment.

She showed that if people feel underpaid, they work less efficiently and are more likely to quit. This suggests, counter-intuitively, that paying people too little could actually undermine productivity. The employers with the highest productivity, she wrote, seek to improve morale by paying more than the minimum wage they can get away with. This can also mean their staff are less likely to be poached.

This finding came from Yellen’s own experience: when she hired a babysitter for her son, she and her husband decided to purposefully pay more than the going wage, figuring a happier babysitter would provide better care. They got plenty of great applicants, which led to Yellen’s paper.

Yellen’s done a lot more research, a lot of it with her husband.

According to her annual financial disclosures, the last of which was in August, she held investments worth at least $4.8 million in 2012.

That includes her stamp collection, which is worth at least $15,000.

Most of Yellen’s investments are in broad-based equity and bond funds.

5. Is she a dove? She hates unemployment and inflation

Many describe Yellen as a monetary ‘dove’ – someone who’s more concerned with boosting employment than combating inflation.

But her defenders say she’s been willing to raise rates to beat unemployment too.

The fact that she has grave concerns about unemployment is indisputable.

“These are not just statistics to me. We know that long-term unemployment is devastating to workers and their families,” she said in a speech to an American unionist gathering in February.

But in other speeches, she’s stressed that the Fed should never repeat the experiences of the late 1960s and 1970s, when it didn’t respond quickly enough to rising inflation. She’s also long argued that the Fed should adopt a 2% inflation target. Australia’s RBA targets inflation between 2-3% a year, but the American central bank has no explicit target. Instead, it has a ‘desirable’ target range of between 1.7%-2% inflation. Adopting a specific target would give policy makers less leeway to let inflation rise above this band.