Treasury has published its three-month review into the $86 billion JobKeeper program after Prime Minister Scott Morrison unveiled changes to the wage subsidy scheme on Tuesday.

The 49-page review is packed with information about the largest fiscal support measure in Australian history. But you aren’t going to read the entire thing; you have better things to do. So here are three quick takeaways from the review.

Keep in mind: Treasury was the architect of the JobKeeper package, so it is essentially reviewing a scheme of its own creation.

Treasury argued there was a “strong case” to extend the JobKeeper program past its initial expiry date at the end of September.

While finding JobKeeper creates adverse incentives across the labour market, lowering mobility, curbing the incentive to work and preventing some workers from finding more productive roles, Treasury concluded the alternative would be worse.

“At the sectoral level, it is highly likely that some sectors, such as tourism and arts and recreation, will remain distressed throughout the remainder of this year and beyond, largely due to the health restrictions that will remain in place,” Treasury said.

So why not just target subsidies to affected sectors? Treasury argued that would be too difficult.

“It is too difficult to define the affected sectors in advance and to define sectoral boundaries,” Treasury said.

“A better approach to sectoral targeting would be to maintain JobKeeper but reassess eligibility in October based on actual decline in turnover. This would target the most affected businesses and would reduce the proportion of the economy at risk of the adverse incentives of JobKeeper.”

2. Who has received JobKeeper payments?

The review parses through a few interesting data points about the type of businesses and workers accessing the JobKeeper program, here are a few: 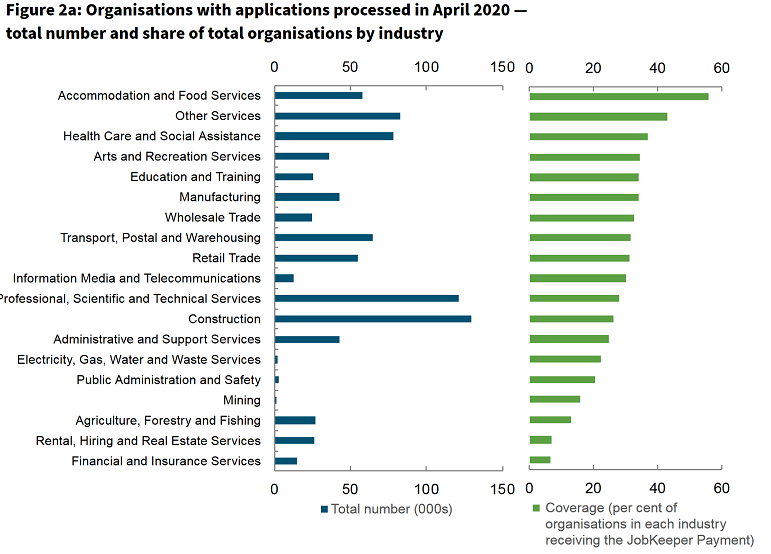 3. Compliance and integrity: Treasury and the ATO have been busy

A wave of JobKeeper compliance action in recent weeks has prompted complaints from sole traders and small business owners accessing the program.

According to the Treasury review, the ATO had blocked 26,000 enrolments or applications from organisations deemed ineligible for the program by June 22.

A further 4,600 fraud tip-offs relating to the JobKeeper program have been received and 797 of those have been selected for follow-up action.

A total of 79 businesses have been actively reviewed for potential fraudulent behaviour, while three matters have been referred to the Serious Financial Crime Task Force.

Meanwhile, the Fair Work Ombudsman (FWO) had received a whopping 67,526 inquiries related to JobKeeper or COVID-19 by June 22, the majority of which have been successfully resolved.