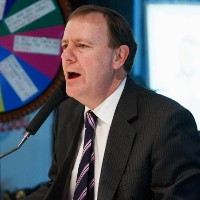 Former Treasurer Peter Costello has thrown his support behind calls for a reduction in the GST-free threshold for overseas online purchases, telling a conference in Sydney this week the Australian retail landscape has changed dramatically since the GST was introduced in 2000.

“It’s about time,” says Peter Strong, executive director of the Council of Small Business of Australia, who told SmartCompany this morning the federal government should take on the former Treasurer’s suggestion.

“This is something we’ve been saying for a long time, but it’s been ignored,” says Strong.

Strong says he would like to see consumer groups such as CHOICE come out in support of reducing the threshold, which applies to goods purchased by Australians from overseas retailers.

“The big issue for us is that the consumer groups don’t understand what tax is about,” says Strong, who says more than $1 billion in tax revenue could be collected by the government if the threshold was reduced.

“It’s about hospitals and running the country,” he says.

“In the days of budget deficits that billion dollars would be very handy.”

But a spokesperson for Small Business Minister Bruce Billson told SmartCompany any change to the threshold needs “unanimous agreement” from the state and territory governments.

“The full business case for lowering the threshold has been provided to the states and territories for their consideration,” says the spokesperson.

“Commonwealth and State and Territory Treasurers will next meet at the Council on Federal Financial Relations, scheduled for September, at which time this issue will be discussed with a view to agreeing on a preferred approach.”

The small business community is likely to be less impressed by Costello’s comments about the possible introduction of an “effects test” in Australian competition law, which would make it more difficult for large corporations to squash their small counterparts.

Costello sided with retail giant Wesfarmers on this issue, telling the audience at the Australian National Retailers Conference he urges Ian Harper, chair of the government’s review into competition policy, not to introduce the test.

“If you take the view that competition is there for the consumer, which is what I believe is the fact, everything else will fit into place.”

“That’s why I’m against the so-called effects test, [which is] designed to protect competitors, particularly less efficient ones, from a competitive challenge. That is why it has never been previously adopted despite much political lobbying over the 20 years I’ve been knocking around this issue.”

Strong says he wasn’t surprised by the comments, which he says simply support what Costello “and Graham Samuel did for far too long”.

Strong believes there is too much focus on the effect test, which is just one aspect of the competition review and “not the be all and end all”.

“The bigger issue is unconscionable conduct,” he says.

While Billson’s spokesperson did not comment specifically on Costello’s remarks, he said the government is “committed to creating an economic environment where competition is based on merit, not on muscle”.

“We want to give efficient businesses, big and small, the best opportunity to thrive and prosper,” says the spokesperson.

“When Minister Billson announced the Harper Review in March, he said the government wanted this review to be more than just an examination of the black letter law. We want the panel to look at how we can improve productivity and growth.”

“The Harper Review panel has been asked to look at whether existing provisions are performing as intended and what we can learn from court decisions in terms of what toolkit we may need into the future.”

The Harper Review is expected to release a draft report by the end of September.