RBA governor Philip Lowe holds the interest-rate lever — so why is he too scared to pull it?

RBA governor Philip Lowe feels trapped. Presiding over an economy with insipid growth and beset by new risks, the man who holds the interest-rate lever is too scared to pull it.

Speaking at an event in Sydney on Wednesday, the RBA governor enumerated the reasons to cut rates. It would help people pay off debt, he said, it could boost consumption, it would lower our exchange rate and it could boost jobs growth.

And yet the bank decided on Tuesday to leave rates on hold at their record low but-perhaps-not-low-enough level of 0.75%.

“[T]here is a balance to be struck here,” said the governor.

As the next graph shows, the RBA expects the labour market to improve. But not much. Unemployment stands at 5.1% now and the bank expects that to continue for another year, before falling one-tenth of a percentage point during 2021 and a little more the year after.

This hardly represents an economy with fire in its belly. It is certainly not enough to create strong wages growth. 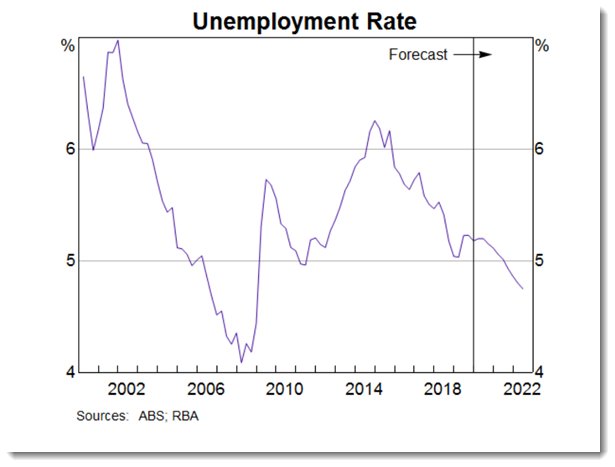 The bank expects wages to keep stagnating — growing at a level that will not spark inflation. Wages growth is expected to pop up once unemployment is below 4.5%.

Yet unemployment is not forecast to fall that low, meaning we should expect more tepid wages growth and, as a consequence, more tepid consumption growth.

As the next graph shows, consumption growth has collapsed. It has fallen below the rate of population growth, meaning per capita consumption in this country is shrinking.

Nevertheless, the RBA forecasts consumption to promptly bounce back. This is certainly what we hope will happen. But is it realistic when no new action is being taken to prompt it? 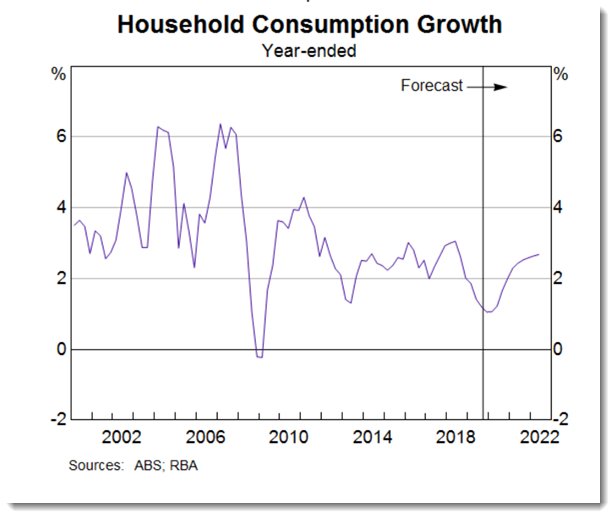 There is a distinction between “masterful inaction” and being paralysed by fear. The RBA risks the latter. It is deeply concerned about driving house prices to higher highs — levels that would seem especially hard to justify given the insipid economic outlook

“We are aware of the risk of low-interest rates encouraging too much borrowing and driving excessive asset valuations,” said Lowe on Wednesday.

This is the single biggest reason not to cut rates.

None of us wants a house price bubble. And striking balances is the art of policy-making. But at this juncture, the housing market has the RBA by the neck. The bank feels trapped.

The Australian Prudential Regulation Authority is the organisation charged with overseeing banks lending standards. In the middle of last year, it removed rules that said banks should assess borrowers repayment capacity against an interest rate of 7%.

Rate cuts came around the same time, and shortly afterwards the housing market roared back to life.

APRA has been a major part of what they call “macroprudential” policy — using regulatory measures to manage the economy.

Relaxing monetary policy and macroprudential policy at the same time has caused our housing market to recapture, in the last six months, much of its earlier losses. 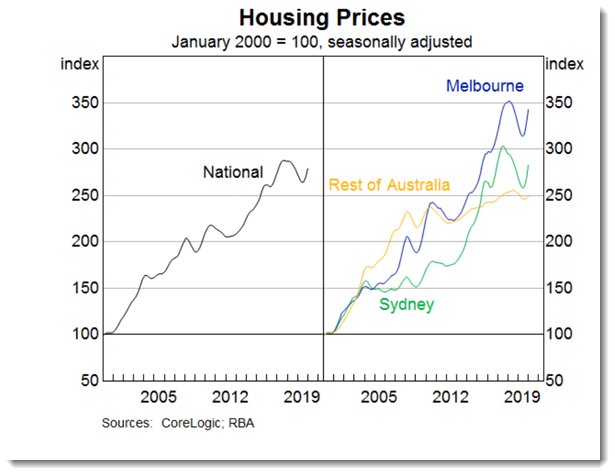 The RBA doesn’t talk so much about macroprudential policy these days. It should.

Using APRA aggressively could permit it to give the economy the shot in the arm it needs, while preventing the housing market from getting excessively bonkers.

The RBA may feel trapped, but there may yet be ways out it hasn’t sufficiently explored. Surely we can dial in a combination of monetary policy and macroprudential policy that delivers a healthy economy and a housing market that doesn’t stray into the absurd?

Of course, the RBA is not the only policy-making institution in Australia.

Its openness and clarity of communication can make it feel like that sometimes, but it’s important to remember the RBA works for the people via an elected representative — the treasurer. Josh Frydenberg has ultimate responsibility for the economy.

What is Frydenberg doing to get the RBA governor out of this trap? The answer is apparently not much.

On Wednesday, in the question and answer session following his speech, the governor engaged with a surprisingly large number of questions about the importance of fiscal policy.

In each of them he affected an academic stance, and emphasised his role was not to tell the government what to do. But if he really didn’t want to comment on fiscal policy he simply would have dodged the questions.

“There’s a limit to what the central bank can do here,” Lowe said, in what could be read as a surreptitious urging to the government to act.

Lowe made clear his disdain for the merits of a narrow surplus, suggesting the big question was why the country was not now making investments that would drive the economy in 20 years time.

But’s Frydenberg’s budget — due in three months’ time — has been battered by bushfires and is unlikely to contain the kind of big investments the bank thinks would help.

That means it’s not just the RBA governor that’s trapped. It’s all of us.