Revealed: How much Australians really earn

A casual glance at the news in recent months may have left you thinking the average Australian earns almost $85,000 a year.

If that sounded insanely high to you, then your instincts were bang on. An ordinary Australian earns way, way less than that.

But it doesn’t appear to have stopped Treasurer Scott Morrison using the figure to sell his income tax cuts.

A piece of Treasury modelling given to Fairfax and News Corp two weeks ago appeared to claim $84,600 a year was an average income. And that, by a specious line of reasoning, meant the tax cuts would benefit middle Australia the most.

But official government figures show this is highly misleading. According to figures provided to The New Daily by Treasury itself, the average wage is just over $62,000 a year.

Figures from the Grattan Institute, meanwhile, show the median tax-filer’s income is just under $45,000 — only just over half the supposed “average income” used by The Australian and others to justify the government’s proposed income tax cuts. 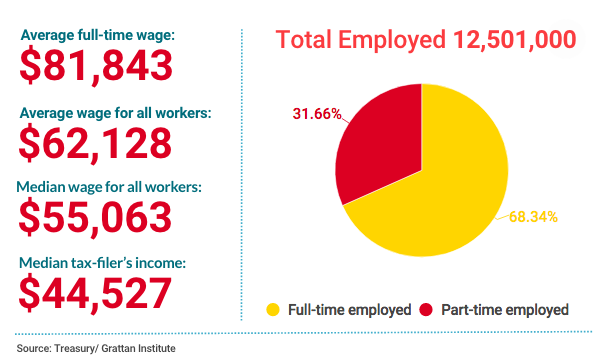 The misleading world of wage data

The $84,600 a year is not plucked out of thin air. It actually comes from the Australian Bureau of Statistics’ ‘full-time adult average weekly total earnings’.

According to the ABS, in November last year the average full-time wage, with overtime and penalty rates, was $1628 a week. Multiply that by the number of weeks in a year (52) and you get $84,656.

First of all, only 68% of workers are full-time workers, according to the ABS. Include the 32% of workers who are part-time, and the average drops dramatically to around $62,000 a year.

Secondly, this ‘average’ is the mean rather than the median. This is a crucial difference. The mean takes the total collective income earned, and divides it by the number of earners. But because some people earn way, way more than others, the mean is significantly skewed towards the upper end.

As independent economist Saul Eslake put it: “If Bill Gates walks into a bar full of ordinary Australians, the mean income of the room has suddenly gone up a lot; but the median income hasn’t changed at all.”

The median is more focused on actual people rather than abstract numbers. It essentially lines up every worker in Australia from lowest income to highest income, finds the person right in the middle, and that person’s income is the median wage.

According to Treasury, the median wage or salary is $55,063 a year.

The New Daily’s calculations, using ATO data which you can view here, suggested the median income is closer to $50,000. But either way, nobody is seriously arguing that it is anywhere near $84,661.

And if you’re wondering why the graphic above puts average full-time wages at $81,843 — well, that’s because it refers to ordinary earnings. The $84,661 includes penalty rates.

And now to really confuse matters …

The ABS figures only refer to wages and salaries — that is, money earned through an employer. They do not include other forms of income, such as investment earnings, rental income if you own an investment property, and so on.

As you might expect, including all income pushes up the mean. But surprisingly, it actually reduces the median.

Grattan Institute economist Danielle Wood told The New Daily the best way to get a picture of what ordinary Australians are earning is to look at what she calls the median “tax-filer” — that is, the median of everyone that submits a tax return.

“I think focusing on the median tax-filer gives people a better picture of who really benefits from policy change,” Wood said.

“Often the people the government refers to as the ‘middle’ are actually high income earners.

“For example, people earning up to $90,000 can qualify for the full value of the government’s ‘low and middle income tax offset’ [the first part of the government’s three-stage tax cut plan] despite being in the highest earning 20 per cent of tax filers,” she said.