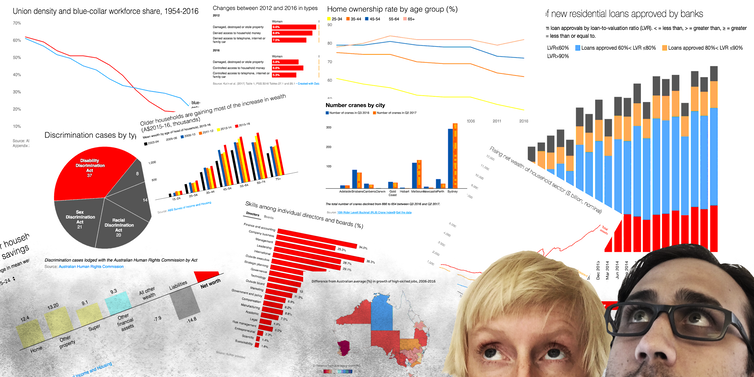 Here in the business and economy team at The Conversation, we love charts. This year we’ve made plenty of good ones with academics.

There were the charts that showed how the wealth gap between old and young was growing and how this was affecting mortgages and home ownership.

Then there were the ones on how our workforce is changing (and how we’re discriminating in it) and what this means for unions.

Charts have a way of showing us that we can be wrong about our thoughts on, say inequality in Australia and financial vulnerability.

But it would be wrong of us to finish the year without just a few more charts, three in fact.

Not so many jobs, maybe forget innovation

We’re hearing a lot less of the “jobs and growth” and the “innovation” mantras from Prime Minister Malcolm Turnbull and Treasurer Scott Morrison.

Maybe Jesse Stein was right when she suggested at the start of 2017 that it was time to ditch the spin around innovation. It got a very small mention in the Federal Budget, but it’s been hard for the government to make it stick to other policies too.

Speaking of other policies, there’s not much doing in jobs either. Despite the enthusiasm about recent unemployment figures, underemployment (where you can’t get enough hours despite having a job) remains high. For those who don’t have a full time job, like young people in the arts or services industry, it seems the pay off of casual work ain’t what it used to be either.

The Amazon apocalypse that didn’t happen

So far, Amazon’s Australian launch has been a bit of a fizzer. But tales of impending retail “decimination” were everywhere this year.

At The Conversation, Gary Mortimer correctly predicted that Amazon won’t be the end of shopping as you know it. At least so far.

But this isn’t the end of the story. The likes of JB Hi-Fi and Harvey Norman will likely feel the heat, considering Amazon’s scale. And shopping centres are already scrambling to offer customers something new.

More worrying are the implications for Australia’s tax system and industrial relations given Amazon’s business model.

Now that Amazon is finally here, it’s time to start thinking about what it means for our own habits. Should we “click and collect”? And what’s with everyone trying to sell you a subscription box?

Maybe I will invest in Bitcoin…

One Bitcoin, as of mid day on December 15, was worth about $22,000. That could buy you more than 6,000 avocados (because who wants a house anyway), 1,375 kilograms of Vegemite, four Chinese crested dogs or a small to mid-sized car.

Although you’d have to have at least two Bitcoins to buy a Tesla Model 3 Roadster, but as Tesla is not yet ready to deliver this model in Australia, you may want to wait until you only need one Bitcoin.

But of course Bitcoin is a cryptocurrency so unless you exchange it for cash at the right time, all these comparisons are meaningless. In fact we’re not quite sure how to value Bitcoin even though we know why the price might be skyrocketing and how much energy it is guzzling.

All we can do is look back on bubbles and crashes of old and hope next year won’t see the worst case scenarios come true.