Tight-arse diners cost “pay as you feel” restaurant $4000 in one night: Could this pricing model work for you? 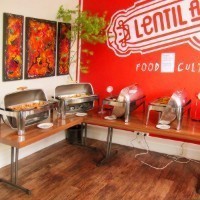 Vegetarian restaurant chain Lentil as Anything has taken a $4000 hit in one day after customers took advantage of its “pay as you feel” pricing model.

The not-for-profit restaurant chain has four locations in Melbourne and one in Sydney and has been operating for 15 years.

Read more: Why pay-what-you-want pricing may not be as crazy as it seems

There are no prices on the menu and customers donate money for their meal in collection boxes in each restaurant.

But Fairfax reports after one particularly busy day last week the Abbotsford branch of Lentil as Anything served almost 1500 people but recorded a loss of roughly $4000.

Signs at each restaurant remind diners a donation of around $12 will cover the cost of a meal and help with restaurant overheads but the average spend on that day was just $2.75 per head.

Lentil as Anything owner and founder Shanaka Fernando told SmartCompany the restaurant had suffered as a result of festival goers looking to score free food.

“Every now and again, especially during the summer festival season, we experience a huge influx of people without the donations per person matching the demand for our food and that makes things a bit tricky as we always travel close to margins,” he says.

“From an overall perspective, it is a very sustainable project that we have been running over the last 15 years.”

Fernando says Lentil as Anything is “not an entity in peril by any means”.

“That Monday was a big hit but the following weekend we made up for it,” he says.

Jon Manning, pricing expert at the Pricing Prophets, says the challenge for businesses which let customers pay what they want is they are not anchoring their customers to a price point.

“When someone pulls out $2 you want to be saying you are embarrassing yourself by that contribution,” he says.

Manning cites HumbleBundle.com which offers a bundle of digital products such as e-books and games with customers nominating their own price.

If customers pay above the current average price they get an extra two products.

“It’s a self-fulfilling prophecy as it drives the average price up for the next person,” Manning says.

“For a more mainstream business I think there are risks in a pay what you want model.”

But Manning says some of these risks can be mitigated and says a Geelong law firm has had some success by allowing customers to tip when it sends out its invoice.

“It’s pay what you want but it’s upwards from the price quoted rather than down,” he says.

“That’s something anyone can do, particularly professional services firms which charge for time rather than value.”