The McKell Institute has released new modelling that shows extending the closure of international borders on account of Australia’s slow vaccine rollout rate will cost billions.

The current rate of vaccination is likely to set back the opening of Australia’s borders to the world by an extra 81 days than planned, the report says. Modelling shows that the economic cost of this delay is approximately $16.4 billion.

McKell Institute executive director Michael Buckland said it was important for every Australian to understand how costly the vaccine rollout delay will be, including the punitive impact on struggling industries like aviation.

“Lockdowns are devastating to the economy, but even if we were to somehow avoid any more, the cost of maintaining border closures is disastrous in and of itself,” Mr Buckland said.

“If Australia’s border remains closed for even longer, the government has no choice but to increase support for the aviation industry and its workforce.”

Last Friday, Prime Minister Scott Morrison told 2GB that COVID-19 jabs were being dispensed by GPs at its highest rate (over 60,000 were reported on 29 April).

“The states and territories will use their distribution arrangements and our GP respiratory clinics for people aged over 50 and, on the 17th of May, that will be done through GPs as well,” Morrison said.

“But our GPs, they’re the heroes of this, they’re the ones who are answering the questions that people have and they’re taking care of their patients and then getting them vaccinated.”

As of Wednesday, the total COVID-19 vaccine doses administered across Australia was 2, 473, 529 — meaning that Australia’s target of 4 million vaccinations by the end of March remains just under 50% short of the target two months after the planned deadline.

The predecessor to this latest report from the McKell Institute found that conservatively, the cost of additional lockdowns in Australia would be approximately $1.4 billion. This was the case even if Australia followed the UK’s world class vaccination rate. 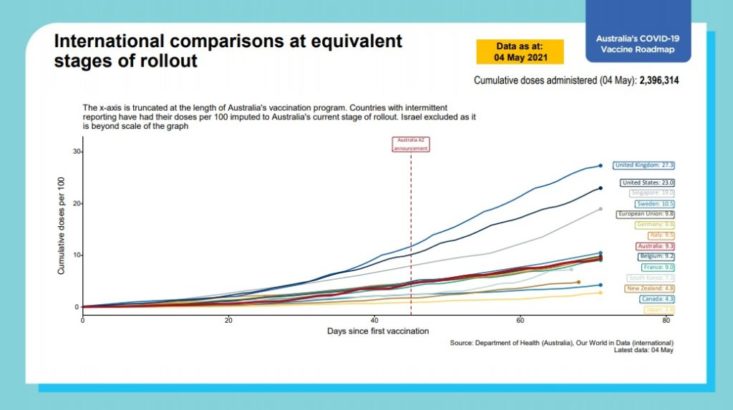 International comparisons at equivalent stages of rollout – 4 May 2021. Source: Department of Health.

Buckland said that the escalating COVID-19 situation in India underscored the importance of vaccinating most in a nation’s population to protect Australia’s economy.

“Australia has built a thriving economy based on open trade, immigration, and engagement with the world. Every week we go without these things it badly weakens our economy,” he added.

Aussie tech giants have partnered up with Medical Oxygen for All, an organisation coordinating distribution of medical supplies in India.

Small businesses are banking on the federal government unveiling support for SMEs in the budget, a new survey by Xero shows.