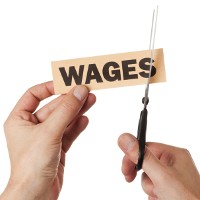 Australian wages are failing to keep pace with inflation, according to figures released by the Australian Bureau of Statistics yesterday.

The figures show wages have effectively gone backwards, rising to just 0.6% in the June quarter in seasonally adjusted terms.

On an annualized basis wages grew at 2.6%, well below the inflation rate of 3%.

Until recently Australia’s mining industry did the heavy lifting with wage increases of 6% or more each year.

But the end of the mining boom has seen wages in the sector drop to 2.5%.

The industries with the best wage rises were education (3.2%) followed by arts and recreation, electricity, gas and water and health care and social assistance, which all recorded 3% wage increases.

Industries with the least generous increases were tourism at 2.1% and wholesale trade at 2%.

The release of the wages data follows last week’s unexpected hike in the unemployment rate to 6.4% for July.

“That is reflected in unemployment climbing and the slowest wages growth in 17 years,” he says.

But Bloxham says the data is not unexpected given the economy is transitioning from one that was previously driven by mining growth.

“The transition won’t be smooth and the labour market is where it is weakest,” he says.

Bloxham says falling real wages is not good for household consumption but it does help improve Australia’s competitiveness in the world economy.

“We have long talked about Australia having weak productivity growth and needs to improve its competiveness to make the transition to non-mining lead growth,” he says.

“It tells you there is ample labour available to employ and, from a small business perspective, if you are looking for employees now is the time to think about it.”

Bloxham says with plenty of labour available and wages growth slow it’s a great opportunity for small business to take on more employees.