Wages growth slumps to 18-year-low: What does it mean for your business? 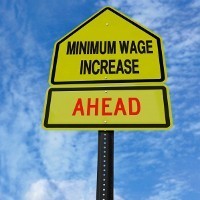 The rate of growth in Australian wages is the lowest it has been in 18 years, according to official statistics released by the Australian Bureau of Statistics yesterday.

Wages in the information media and telecommunications industry recorded the largest wage increase in the December quarter of 1.2%, while at the other end of the scale, wages in the accommodation and food services industry grew by 0.2% in the three-month period.

The WPI is calculated using a sample of wages paid to around 18,000 people working for 3000 private and public companies in 18 sectors.

The ABS first started tracking changes in individual salaries and wages in 1997 and this is the lowest rate of growth recorded since.

Kate Carnell, chief executive of the Australian Chamber of Commerce and Industry, told SmartCompany the rate of wages growth in Australia has been “quite flat” for some time but an annual rate of 2.5% is “still in line with inflation”.

While Carnell says an annual increase in wages of 2.5% is probably “the best SMEs could afford”, many are struggling to accommodate any wage increase as business conditions remain flat.

“Confidence is low and profitability is flat, it has been for a long period of time,” Carnell says.

Carnell says many SMEs would not be seeing a 2.5% increase in their business and at the end of the day, wages have to be paid from turnover and profit.

“We know rents are increasing above the CPI and power prices are more than that, so still a real challenge for SMEs,” she says.

“I know a lot of SMEs who would be pretty pleased to have an extra 2.5% in their pockets.”

Carnell says the wage data is another indication for all governments that the SME economy is “flat”. She says the main way governments can help SMEs is to “look at how their taxes and charges and red tape is getting in the way of growth”.

ACCI’s 2015 National Red Tape Survey, released yesterday, found red tape continues to hamper the growth of Australian SMEs, with nearly half of the survey respondents reporting the impact of regulation had stopped them from making changes to grow their companies.

The survey backs up research by MYOB, also released this week, which says collecting GST costs Australian SMEs more than $13.7 billion each year.

“The war in Australia won’t be about unemployment, it will be about bidding for skilled, talented people,” Harcourt says.

Harcourt says SMEs must invest in the education and training of their staff, as well as flexibility in the workplace, if they are going to survive.

But equally important is ensuring any wages increases in your business are matched with productivity gains, Harcourt says.

“Most SMEs want to pay workers well because they ultimately stay with the company and acquire more skills,” he says.