What does the RBA interest rate cut mean for your business? 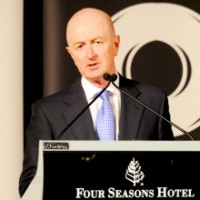 Businesses have welcomed the Reserve Bank of Australia’s decision to lower the official cash rate to 2.25%, with retailers in particular jumping for joy at the prospect of households having extra disposable income.

Yesterday’s announcement was the first time the RBA had cut interest rates since August 2013.

RBA governor Glenn Stevens said in a statement yesterday the decision to lower the cash rate was made off the back of declining commodity prices and below-trend growth in the Australian economy.

“This action is expected to add some further support to demand, so as to foster sustainable growth and inflation outcomes consistent with the target,” Stevens said.

The Australian dollar immediately tumbled to a five-and-a-half year low of US76.6 cents, before bouncing back to around US77.8 cents this morning, while local stocks jumped as investors chose to move their funds from bank assets to the sharemarket.

Homeowners will be letting out a sigh of relief, with the Bank of Queensland the first to announce it was passing on the full cut to its variable rate for home loans. The Commonwealth Bank followed suit this morning, announcing it was cutting its standard variable mortgage rate by 25 basis points to 5.56%.

University of New South Wales economics professor Tim Harcourt told SmartCompany there is a “bit of a perfect storm” at the moment with lower interest rates and a low Aussie dollar.

“Retailers will be getting a lot of relief with the exchange rate – when the dollar was higher we were exporting to Asia and buying imports from America,” Harcourt says.

“For the domestic retailers, domestic tourism and the very small portion of manufacturing companies that don’t export or compete with exports, the combination of a lower dollar  and interest rates will probably help.”

However, Harcourt points out that a lower exchange rate is “not always good” for businesses importing computers and tech equipment.

“It means takeovers from foreign entities are more likely. So a lower dollar is not always a perfect thing for everyone.”

Harcourt says the RBA’s decision will likely boost business confidence in the short term; however, the current political climate is not helping.

Business groups were also cautiously optimistic, with Australian Industry Group chief executive Innes Willox saying the move is a recognition of the soft state of the domestic economy.

“While the lower dollar will help stimulate local activity in time and lower prices for fuel are also favourable for domestic businesses and households, to date these have not been sufficient to counter the sources of weakness in the economy,” Willox said in a statement.

The lower cash rate was also welcomed with open arms by the Australian Retailers Association, with executive director Russell Zimmerman saying local retailers have been waiting for this outcome for some time.

“This decision comes after a drop in fuel costs and the government’s recently announced small business tax cuts, which we hope will also help to overcome mixed international and Australian economic news,” Zimmerman said.

“The ARA also asks banks to pass on this rate cut in full to consumers and businesses. We’re optimistic that the RBA’s decision will provide retailers with some much needed relief and allow them to start the new year with confidence.”