Why one Brisbane bookshop is offering free books to G20 leaders 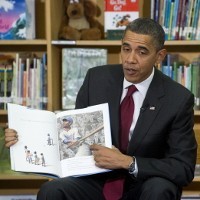 As Australia’s political leaders prepare to welcome some of the most powerful people in the world to Brisbane this week for the G20 summit, one Brisbane small business is offering a special gift to the likes of US President Barack Obama and German Chancellor Angela Merkel – free books.

Avid Reader in Brisbane’s West End has sent out formal invitations to the embassies and High Commissioners of the G20 countries for the wold leaders to visit the bookshop. In return, each leader will be given a collection of Australian books for free.

The list of books covers a gamut of political issues – from climate change to gender equality – while also including two fiction titles, Richard Flanagan’s Man Booker Prize winning The Narrow Road to the Deep North and Melissa Lucashenko’s Mullumbimby.

Avid Reader co-owner Fiona Stager describes the offer as “audacious” but says it is “a fun way to make a serious point about literacy and illiteracy”.

“With all this talk about economic growth, illiteracy is a fundamental issue here in Australia and when we looked into it, we found that more than 700 million people around the world are illiterate,” Stager told SmartCompany.

“We thought we would be a bit cheeky but the books we have chosen are ones we are passionate about, they are about gender, community, climate change, knowledge and learning empathy through fiction.”

Stager hopes the offer also highlights the “big negative impact” the G20 summit is having on small businesses in Brisbane’s West End, many of which are either included or located close by to the G20 exclusion zone.

“The other aspect of it is that they have to come here because there is an exclusion zone,” she says.

“There was talk that the G20 would generate something like $400 million but that is not happening in the West End economy. A lot of businesses are being negatively impacted.”

While Avid Reader is not included in the exclusion zone, Stager says “the trouble is everyone thinks we are”.

The G20 leaders are yet to take up Avid Reader’s offer but Stager says she would be thrilled to see Merkel or perhaps Christine Lagarde, managing director of the International Monetary Fund, pop in to say hello.

“You know Barack Obama is a big supporter of bookshops in the US so you never know!” she says.