Why the Renewable Energy Target never stood a chance 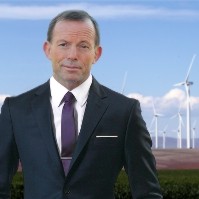 The Australian Financial Review, confirmed the worst fears of the renewable energy industry in a front-page story on Monday, reporting that the panel charged with reviewing the Renewable Energy Target had been “instructed” by Prime Minister Tony Abbott to look at ways to shut down the scheme.

Shutting down the RET would bring to an end a $20 billion industry, cost thousands of jobs and force household and business bills to soar. But that is what the government has wanted from the beginning. It appointed a panel composed of climate sceptics, pro-nuclear advocates and fossil fuel lobbyists.

Killing the RET would satisfy the right-wing ideologues and deep-lined antipathy to renewable energy within the Abbott government. The AFR also confirms what has long been suspected: that Environment Minister Greg Hunt and Industry Minister Ian Macfarlane have been effectively sidelined from the process, despite the issue crossing into their portfolios.

The PM’s office has had carriage of the project since the start, and his intentions have long been clear. The secretarial support has been housed within Abbott’s office — and within reach of his principal business advisers, including climate sceptic and renewables opponent Maurice Newman and Abbott’s own energy adviser, former AGL executive Sarah McNamara.

Government insiders who have worked on the RET Review say the intent of the review has always been to cut the current 41,000GWh Renewable Energy Target to a maximum of 25,000GWh (what might be called a “true” 20% target), and possibly close it to new entrants altogether.

There were glimmers of hope that the RET could be retained, particularly when the panel’s own modeling dismissed the two major arguments to drop the target   — that the target could not be physically met, and that it would be costly to consumers. An ACIL Allen report said there would be no issue meeting the 41,000GWh target and that even based on its own conservative inputs, consumers would be better off in the long term from having more renewables in the grid.

The new argument was based around a “transfer of wealth” from the generators to consumers. But even then, the RET report is believed to have favoured a “scaling back” of the target to 25,000GWh or 27,000GHW — a position said to be favoured by Hunt.

A report released today by consulting firm Jacobs, on behalf of The Climate Institute, Australian Conservation Foundation and WWF Australia, says that the biggest beneficiaries to dumping the RET would be the fossil fuel generators. The Jacobs report suggested $8 billion in additional profits to coal-fired generators out to 2030 and an extra $2 billion to gas generators. The big three retailers, AGL Energy, Origin Energy and EnergyAustralia, would be the biggest beneficiaries.

AGL Energy — presuming it completes the purchase of Macquarie Generation’s 4.6GW of coal generators in New South Wales — would pocket an extra $2.7 billion, EnergyAustralia would get an extra $2 billion boost, and Origin Energy would secure a $1 billion. All three companies have been active in their opposition to the RET, and to subsidies for small-scale solar in particular.

Although the RET Review panel was not due to deliver its final report to Abbott’s office until late July, it was to “consult” with draft findings before that delivery. That is when the RET Review panel was instructed to “look more closely” — as the AFR puts it — at the option to close the target to any new entrants, and possibly to await the result of Australian Energy Market Operator estimates, which showed no new capacity was needed on the eastern states’ grid for at least another 10 years. The fossil fuel generators, which are largely responsible for that excess capacity, fear that more renewables would mean more early closures for ageing coal plants.