The government wants to bring forward income tax cuts, but will that actually stimulate the economy?

The government is rumoured to be bringing forward tax cuts. Is that a good idea? Will people spend them? Do tax cuts count as Keynesian stimulus? Or is spending the only good kind of stimulus?

The government’s tax cuts are well understood, the only question is when they are going to make them. A major part of the plan is to get rid of two whole tax brackets, like so:

Most of the benefit of this change accrues to high-income earners. Is that fair? We will come back to that later. For now let’s ask a separate question: is it going to actually stimulate the economy? Because Australia’s economy needs effective stimulus. We should try to get the most bang for our buck.

In theory, tax cuts can work as well as government payments in boosting spending. They both represent money coming out of the government’s bank accounts and into ours.

The difference is in what economists call the marginal propensity to consume. What amount of the money is spent, compared to saved? If people sit on the money, that’s ineffective. We would have blown up the budget deficit without generating much spending in Coles and Woolworths, JB Hi-Fi and Harvey Norman, Caltex and Qantas. Which is the point after all: to get the economy going and creating jobs.

Reserve Banks (RBA) economists have found that Australians on average have a marginal propensity to consume from tax cuts of around 80% to 100%. That’s pretty high, and it rebuts the more extreme claims that tax cuts are only ever saved. But the specifics matter.

At the margin, it depends who the tax cuts go to. They find higher-income people spend less of a tax cut, or lump sum payment.

“Lower-income households tend to consume a greater share of extra income, consistent with the idea that these households are more likely to be liquidity constrained,” they say. Income is not the only factor. Fear of the future also drives saving.

“[Households] that perceive that they are at greater risk of losing their jobs tend to consume less out of lump-sum transfers and income tax cuts.”

The focus of that research was in comparing tax cuts to once-off lump payments. People have a much higher marginal propensity to consume from tax cuts. We see tax cuts as a permanent change to our income, whereas a lump-sum payment (e.g. a $750 payment or a “baby bonus”) we know is a once-off so we don’t spend it all at once.

Incidentally, the tendency of the wealthy to save is why wealth is much more unequally distributed than income. The higher up the income ladder you go, the more saving you can do. The lower down you are the more urgent bills you have to pay.

So two things matter for a maximally effective stimulus: make sure it is permanent (not a once-off), and make sure it is aimed at poorer people. The government’s tax plan succeeds at the first count, but fails on this second count.

Of course there are ways to save a tax cut that might not be so bad. If richer households use the tax cut to pay down their housing debt, that might reduce risks in the system. But if you think that’s important, bear in mind the RBA has argued those risks are limited precisely because it is wealthy people who hold the housing debt. 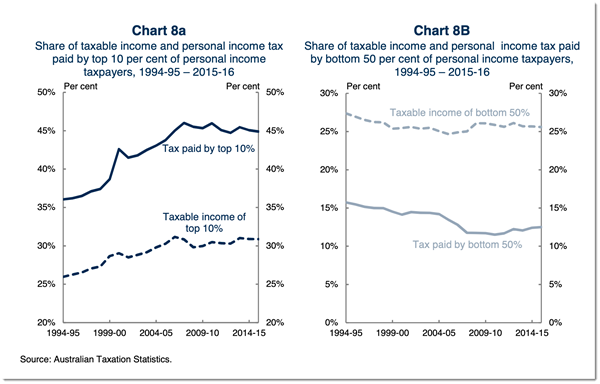 The tax cuts the government is bringing in will make this less system less progressive. Whether you think that is fair or unfair is a judgment call.

That it will stimulate the economy somewhat is a fact. A good share of the extra income will flow out into the economy. But it is also true that the government’s planned tax cuts will do less to stimulate spending than a tax cut aimed at the bottom 50% of income earners.