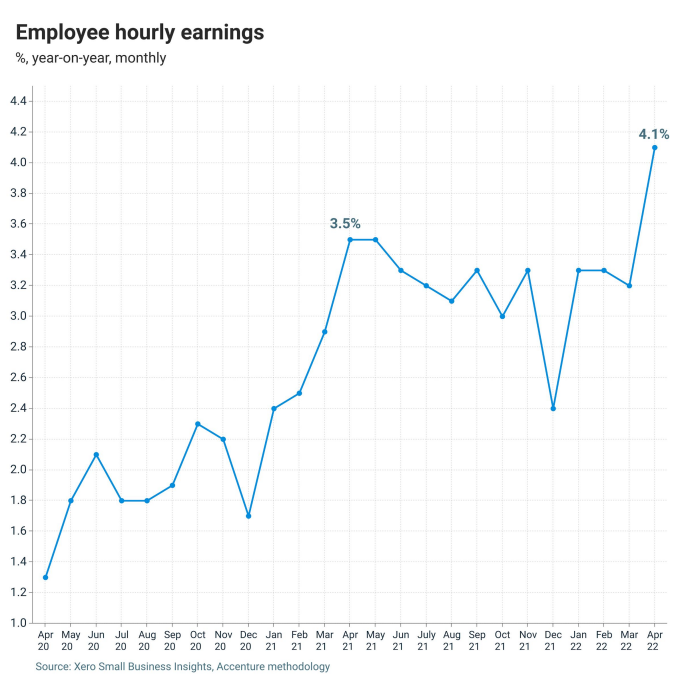 Data from hundreds of thousands of small business payments found wages in the construction sector grew the most, expanding in April by 5.1% year-on-year.

The building sector was followed by manufacturing, at 4.6% year-on-year, and hospitality, at 4.5% year-on-year.

The findings align with those of the Reserve Bank of Australia, which last month said wage growth is finally responding to a tight labour market and increasing job mobility.

Xero’s small business data may “run ahead” of the Wage Price Index for a number of reasons, Xero economist Louise Southall told SmartCompany.

Even so, the implications for small business operators are clear.

“I think our results are probably more in line with what the Reserve Bank has been hearing from their business liaisons rather than the Wage Price Index,” she said.

The first two issues — inflation and rising interest rates — are having a “pincer” effect on small businesses, Southall says.

Small businesses to pay up to 13.5% more for energy as AER flags price increase

Hiking wages to attract talent, while facing growing material costs and loan repayments, means the only way for many small businesses to compensate is by increasing their own prices.

“But this is a challenge,” she said.

“How much do they increase their prices? And how do they manage that when their own customers, or their potential customers are facing a cost of living crisis, and are probably less likely to be able to deal with the price increases?”

“Recreation in particular, subscriptions to your local theatre, it’s your gym membership, so things you might let fly if you’re looking to cut back on your budget,” Southall said.

Small businesses ought to take a hard look at their books over the coming months to maintain profitability, she added.

“It’s going to be very important — particularly for those businesses that have started in the last few years and never had to operate in an inflationary environment before — it’s really important for them to understand just how quickly that profit margin can shrink.”