“I don’t regret it”: Why this family business turned down a $2.5 billion offer from Coca-Cola

Would you turn down a $2.5 billion deal from one of the world’s biggest companies?

For most businesses, the answer would probably be ‘no’, but for the deputy chief executive of one of Vietnam’s biggest beverage companies Phuong Uyen Tran, things weren’t quite that simple.

Uyen Tran heads up THP Beverage Group, which is a multi-million company in the fast-moving consumer goods (FMCG) space in Vietnam. The proudly family-owned business started in 1994 as a beer making company but has switched to producing herbal teas and juices in recent years.

Speaking to SmartCompany, Uyen Tran reflected on when her family’s business decided to reject the deal from Coca-Cola back in 2012, which came in the form of a partnership and a controlling stake in the Asian beverage company.

Her father and the founder of THP, Thanh Tran, made the decision to not take the $2.5 billion payday after deciding Coca-Cola’s core values were not in line with THP and its strong legacy of central planning and new product innovation. Though it was a “huge amount of money” at the time, Uyen Tran said the beverage giant’s ambition was far beyond THP’s core values as a family business.

Initially, Tran says her father considered the deal, thinking the business would greatly benefit from the insights Coca-Cola would have been able to provide, even just through the negotiating process.

But in the end, the stipulation for THP to hand over its product development to Coke and restrict itself from growing its market in any other countries bar Vietnam, Laos and Cambodia ended up seeing the deal nixed, with Uyen Tran calling the restrictions a “deal-breaker”.

“They had the ambition for over 180 new products aimed at more international consumers. At that time, we found there were more things we would love to achieve rather than just selling for $2.5 billion,” she says.

“I definitely don’t regret it, and I really love what we’ve been doing since.”

As predicted, the experience of negotiating the mammoth deal ended up being a strong point of personal development for Uyen Tran, with the business leader saying she gained invaluable insights into dealing with multinational companies and significant business propositions.

“The biggest lesson I learnt was about myself personally as a leader, and how important it is to stay true to my core values and the mission I have,” she says.

“I see work as a way to improve and challenge myself by exploring new areas I don’t understand.”

THP is one of the few remaining FMCG companies in Vietnam which hasn’t been bought out by multinational businesses or expanded to be multinational themselves. Uyen Tran went straight into the company from university after graduating 15 years ago, and says THP take great pride in remaining a family business.

However, the deputy chief executive says while the core values of her family are front and centre for THP, she holds the “unusual” view that there should be very clear lines between ‘family’ and ‘business’, especially when it comes to the 5,000-strong workforce of THP.

“I find that family and business should be separate, and that’s where we’ve been doing a lot of work as a company. Business matters need to be independent of family matters, and that can take a lot of time and effort,” she says. 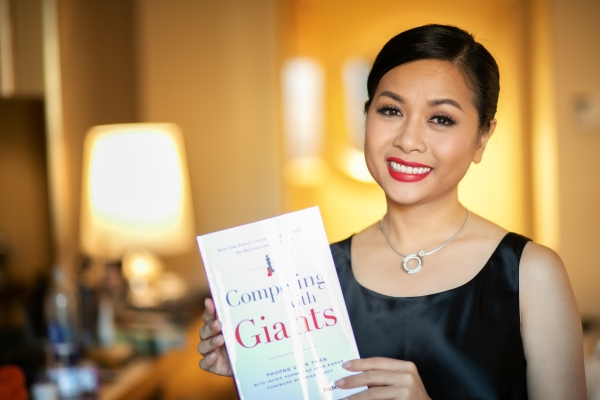 “We’ve been making a lot of investment in making sure the organisation is sustainable and able to be independent of all the founders, as that’s what will see the business grow.”

Uyen Tran says for the business to grow, she knows much of the company’s executives and broader human resources shouldn’t be limited to family members, and also says succession planning “doesn’t need to be blood-related”. Overall, the deputy chief is working towards building a business that lasts for over 100 years.

Those plans have been hindered by the difficulty of scaling a family business, which she says can at times be restricted by emotions and personal issues.

“But that doesn’t mean it’s impossible if we make it our passion. I want to see a Vietnamese brand take its healthy products to the world, and that’s where we’re aiming now,” she says.

The right time to go international

Uyen Tran says the growth opportunities for Australian companies in South-East Asia are immense but warns businesses to not attempt expansion until the time is right.

She implores business owners to not rush into Asian expansion, saying they should understand the strengths and weaknesses of their business for any opportunity, and that businesses not only have to compete with competitors but lift their services beyond their competitors.

“When you’re a local company, you can love the consumer more so you have a greater advantage compared to being an international company where you don’t know your customers,” she says.

Uyen Tran says the South-East Asian population are very young, meaning they’re keen to jump on board whatever trend comes their way which can be a boon for certain businesses. However, they “switch very quickly”, she warns.

“The right time for international expansion is very different from industry to industry, so ensure you know the strengths of your company, and when it the right time to expand and get opportunities to further those strengths,” she says.