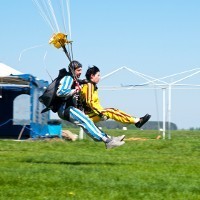 A tandem skydiving company will jump onto the ASX this morning in a bid to boost its market share by raising the necessary capital to acquire its competitors.

Skydive the Beach issued 100 million shares at 25 cents each during the initial public offering, raising $25 million including $5 million in oversubscriptions.

The company will be the first tandem skydiving company to list on the ASX, with an indicative market capitalisation of $73.3 million at the time shares were issued.

Founder and chief executive, Anthony Boucaut said in a statementinterest in the IPO had been strong from both institutional and retail investors.

“Business growth over the past 16 years has been way beyond initial expectations and it is because skydiving has become an adventure experience, with demand across a wide range of people, from young to old,” Boucaut says.

“Skydiving in attractive locations has also become a major tourist attraction and as we expand drop zones nationally, we’re in a position to meet growing interest.”

Boucaut says the funds from the IPO will be used to acquire Australia Skydive, a company which operates five drop zones in NSW and Queensland and conducted more than 47,000 tandem skydives in 2014.

Together, the two companies are expected to hold an approximate 54% market share of the tandem skydiving industry in Australia.

In 2014 Skydive the Beach recorded $18 million in revenue. Once the company acquires Australia Skydive, it expects to bring in $27.6 million in the 2015 financial year.

Should this forecast be met, the business intends to pay a dividend of one cent a share in October 2015.

Ernst & Young partner Gary Nicholson told SmartCompany 2015 is already shaping up to be a strong year for IPOs in Australia.

“We have the strongest pipeline for IPOs we’ve seen since 2007,” Nicholson says.

“Certainly in terms of volume it’s very, very strong. There are not as many mega transactions in the pipeline as there were last year… but a lot of mid-sized companies will list and it’s listing for growth and shareholder exit as well.”

Nicholson says while a lot of businesses are listing because they are chasing growth, he is seeing a lot of IT-related companies list on the ASX in particular.

“A lot of them have a growth with IT enablement,” he says.

“Some are IT companies, but a lot of them are businesses that have a new IT enablement platform. We’re also seeing a lot more property and property-related companies coming through and also quite a few coming through in the retail space as well.”

Nicholson says private equity is also an option for businesses wanting to raise money, and he is noticing companies play off private equity rather than float straight away “as a two-pronged option”.

“A lot of companies are seeing that now is a good time to aggressively drive growth both in Australia and offshore, and using the ASX as the funding mechanism,” Nicholson says.

“So we’re expecting calendar 2015 to be exceptionally strong.”