There is no silver bullet to stop fraudsters

A common stereotype of fraudsters is that they are psychopaths. That fraudsters are considered manipulative, callous and remorseless is understandable, considering the consequences of fraud.

But these traits are not necessarily typical. Different people commit different types of fraud in different circumstances.

I reviewed decisions handed down in fraud trials and found that some fraudsters were completely remorseful, some were partly remorseful and others showed no remorse at all. Several fraudsters I interviewed described distress at violating their morals. One fraudster spoke of his regret at causing harm to his victims.

False stereotypes of who fraudsters are, and why they do what they do, could lead us to go after the wrong people.

That the “typical” fraudster is a middle-aged male manager is another stereotype. But this does not explain two of the largest frauds by individuals in Australian history, both committed by women – Rajina Subramaniam ($45 million) and Sonya Causer ($20 million).

But it says nothing about who will have both a motive for fraud and decide to commit fraud. 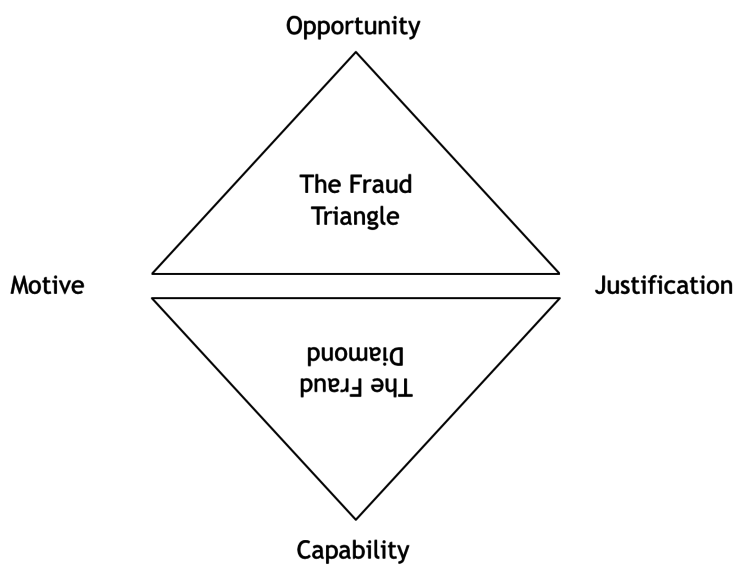 An adaptation of The Fraud Triangle, The Fraud Diamond, adds an extra element: capability. The rationale is that some level of capability is needed to identify and exploit an opportunity for fraud.

But, as I will explain later, this also is too simplistic.

How to spot a fraudster

Some fraudsters have gambling addictions, but not all addicts commit fraud. Some researchers question whether gambling may sometimes be an excuse rather than a reason for fraud.

One of the fraudsters I interviewed described feeling desperate to provide for his family after some investments went bad. He said his shame about his crimes would prevent him from re-offending. Another said he would not re-offend because the risk of a criminal record could prevent him from providing for a family if he had one in future.

The varied results from all this research show the folly in picking just one metric to try to identify a fraudster. Organisations that screen using only criminal records, for example, may wind up hiring more risky, rather than less risky, employees.

Anyway, most employees convicted of fraud do not have prior criminal records and may never re-offend.

Career fraudsters may not show up in a criminal records check. Some are smart or lucky enough not to be convicted, charged, or even caught. Previous employers may not realise they have been victimised. Employers may also decide not to involve the authorities to avoid bad publicity.

So what do you do?

So how do organisations predict which employees might commit fraud when there is no reliable psychological test to screen them?

Employers need to start by avoiding what psychologists call a fundamental attribution error—focusing on characteristics of individuals while ignoring the effect of environment on their behaviour. This means that to predict who is likely to commit fraud, we need to understand the effect of fraudsters’ environments.

I have created a model to explain how different factors, involving both the potential fraudster and their wider context, may influence different stages of fraud in different ways. 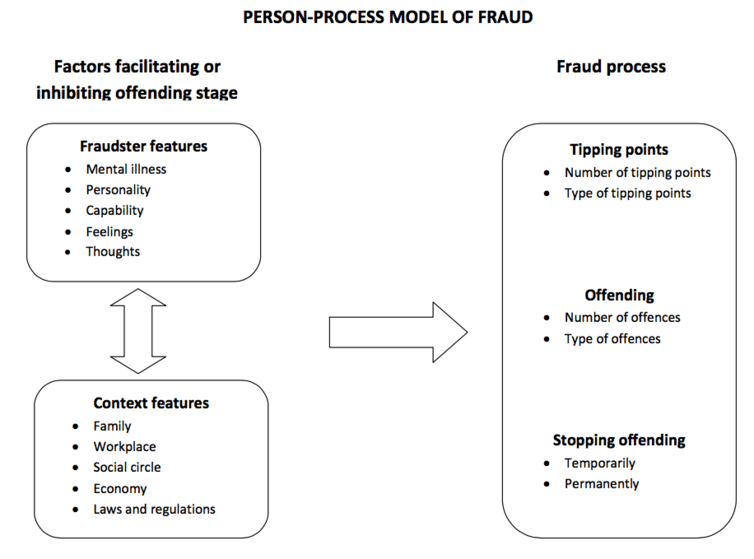 As you can see, there is no one thing we can point to that leads to fraud.

To illustrate the model using the capability element of The Fraud Diamond, an incompetent manager may start falsifying financial statements to disguise his or her mistakes. A lack of capability is no barrier if organisations have poor accounting controls. A smart fraudster may steal more money over a longer period than a less capable fraudster. He or she may also avoid detection altogether.

There is no silver bullet to stop fraudsters. Predicting who is likely to commit which type of fraud under which circumstances would involve comparing a lot of people in the same circumstances who offend with those who don’t. But we don’t yet have the data to do this.

If employers want researchers to tell them which employees are likely to commit fraud, they need to help by reporting fraudsters to the authorities instead of sweeping their offences under the carpet. Researchers need to understand that someone who steals repeatedly may have more in common with a kleptomaniac than a serial killer.

In the meantime, we all need to consider that someone who steals to pay for medical treatment for a dying relative may have little in common with a billionaire Ponzi scheme operator.

Jennifer Wilson is a combined PhD/Master of Organisational Psychology candidate at Macquarie University.

Not sure about a couple of terms in the How to Spot paragraph, but a good article. Consider whether you the employer may create that tipping point that turns the employee sour. I have seen two such cases: unjust and insensitive rulings that got to be paid for many times over without the employer ever knowing..