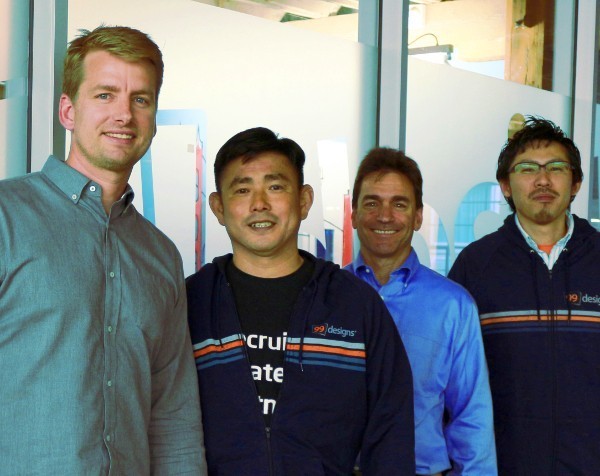 Melbourne design marketplace startup 99designs has closed a $US10 million Series B round, led by Japan’s Recruit Strategic Partners, which will support the startup’s expansion into Asia.

99designs co-founder Patrick Llewellyn estimates the value of the graphic design market in the United States is about $30 billion. Add web design to that figure, which 99designs is inclined to do after partnering with website builder Jimdo, and that estimate grows to about $100 billion.

“International has increasingly become important for us over the last two or three years,” Llewellyn says.

“But we’ve done that still in a relative minimum viable way. By doing this strategic round with Recruit it gives us a way of trying a different tactic.”

To date, 99designs has relied on small acquisitions, like that of Germany’s 12designer, to help gain traction outside of the US and Australia.

“We looked at Japan and there were some opportunities to do a small acquisition, but then Recruit came knocking and they’ve been talking to us now for about 18 months,” Llewellyn says.

“It seems like a really fun and interesting idea and a great place to really test a partner entry strategy, one with significantly more resources.”

Existing investor Accel Partners also participated in the raise and partner Rob Solomon joins the 99designs board of directors. Accel led 99designs $35 million Series A round in 2011.  Back then 99designs revenue was growing at 120% a year, and the startup was paying $1 million dollars a month to its users.

Llewellyn wouldn’t provide current revenue growth figures, but says the startup now pays close to $3 million per month to its users. 99designs valuation wasn’t disclosed at Series A, and Llewellyn was unwilling to provide its valuation following this latest round, but says it’s “multiple times where we were when we took the Accel round”.

The raise follows Australian competitor DesignCrowd’s $6 million Series B round earlier this year.  99designs has paid out over $110 million to designers on its platform since being founded in 2008.

As of September last year DesignCrowd had paid close to $20 million to its designers since being founded in 2007, a figure which had doubled from 2013 to 2014. Llewellyn says there is online competition in every market they enter, but competition from startups is far outweighed by traditional graphic design businesses.