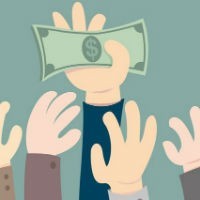 The Prime Minister’s clampdown on foreign investors in Australian real estate has been revealed as little more than a revenue raising exercise.

After all the posturing, this is what it comes down to: a cash grab. Politicians doing to real estate what they always do to real estate: using it as a cash cow.

Otherwise nothing will change in the national property landscape. Not a single sale price will be reduced or not one first home buyer will be better off.

As well as a cash grab, the Tony Abbott move on foreign investment is also a push for popularity by appearing to be doing something for the ordinary bloke. But the thinking is so fuzzy and the policy delivery so confused that it won’t achieve even that shallow objective.

I listened to Abbott announcing and justifying the proposed policy and it was clear he had not sorted out his thinking. The arguments simply didn’t stack up.

He was still trying to infer that somehow this will help battlers achieve the ‘Great Australian Dream’ but couldn’t explain how this policy will achieve that.

It’s all rather bizarre.

There are measures to clampdown on developers who focus their marketing overseas without trying to sell their high-rise apartments locally. But foreign investors are the sole reason most of these highrise buildings are being planned. This is particularly true in over-supplied markets like inner city Melbourne and downtown Brisbane.

They’re not designed for local consumption. Without most, if not all, of the units being sold offshore, these projects will not be built.

That will reduce supply, which theoretically places upward pressure on prices. And it will reduce construction activity, which is deemed the economic savior of the nation at a time when resources investment is declining.

The bottom line is that restraining foreign investment won’t make Australian dwellings more affordable. It will do nothing to change the situation for first time buyers.

Foreign investors are a very small component of the Australian buying market. Their activity is primarily focused on Top End properties in the prestige suburbs of Sydney and Melbourne, and on highrise apartments in the inner city areas of our major cities.

They are not competing with local first time buyers. Restricting foreign buyers won’t change the price on a single house anywhere in Australia. It won’t stop people of Asian appearance (dubbed foreign buyers by disgruntled under-bidders) from winning bidding wars at Sydney and Melbourne auctions of prestige property.

It’s a Yes Minister scenario, designed by Sir Humphrey Appleby and delivered by a befuddled Jim Hacker, who somehow got the pages of the script mixed up – again.