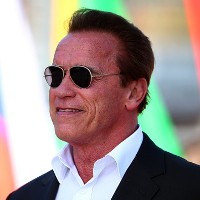 He’s a former governor of California and star of the silver screen, but did you know Arnold Schwarzenegger is also a property investment enthusiast?

“I made my first million in real estate, not in movies,” the former bodybuilding champ told a real estate agents’ summit in Brisbane yesterday.

While Australians have recently seen Schwarzenegger grace their televisions screens as the face of RealEstate.com.au’s latest advertising campaign, the Courier Mail reports Schwarzenegger held the audience at the Queensland Real Estate Agents’ Summit 2015 captive with the story of how he built his wealth through property.

Schwarzenegger’s fist property investment was a block of six units, for which he scraped together $US27,000 by taking part in bodybuilding competitions and working on building sites.

The Terminator star made a profit of $US169,000 on that block of units, which he then invested in a larger block of apartments and Schwarzenegger has continued to trade up his investments since.

“I always promised myself I would not get into a position where I would have to take a job or do a role just because I had to make money to make a living,” he told the room.

Real estate agent coach Glenn Twiddle is the organiser of the Queensland Real Estate Agents’ Summit and the man who convinced Schwarzenegger to participate in the two-day event.

Speaking to SmartCompany this morning, Twiddle described Schwarzenegger as a “beast property investor” who was able to achieve his vision of being a leading man in Hollywood because of his success in property investment.

Twiddle says Schwarzenegger’s investment strategy in the early 1980s was about making the most of the high inflation rate in the US at the time and quickly turning over apartment sales.

“He loved multiple unit dwellings and he still owns a lot of them,” Twiddle says.

“He would buy a block of six apartments, rent out five and use the rent to cover the mortgage for six. From that six he would then buy a clock of 27 units, then a block of 50.”

Twiddle says Schwarzenegger told the audience his strategy worked well for the market at the time but it might not necessarily work now. Nevertheless, Twiddle says investors and real estate agents can still “learn lessons from looking back”.

Twiddle says his clients are accustomed to him providing them with “out of the box marketing strategies” but attendees at this week’s event were “blown away” to be hearing from Schwarzenegger. The room was full of real estate business owners, agents, lawyers and even some gym owners who were keen to hear Schwarzenegger’s tips for success.

Here’s Schwarzenegger’s six tips and how they helped Twiddle fulfil his dream of staging an event with the superstar.

Twiddle says Schwarzenegger’s first tip is about trusting yourself and having a vision.

Twiddle’s own vision was to secure Schwarzenegger – his “idol from childhood” – to speak at one of his events. The idea came to him about a year ago and he says he almost convinced himself it would never happen.

2. Don’t listen to the naysayers

Twiddle says Schwarzenegger told the summit there will always be people who don’t believe in your idea, whether in the public arena or your personal life, but you won’t achieve your goal if you always believe your critics.

Twiddle says this week’s event is also an example of Schwarzenegger’s third rule – to think big. Attracting once of the world’s top celebrities to a real estate conference in Brisbane was an ambitious goal, but one that Twiddle pulled off.

Schwarzenegger told the room there is no substitute for hard work when it comes to achieving your goals.

Twiddle says Schwarzenegger believes people who always have a Plan B or backup plan are in some ways becoming their own naysayer.

For his part, Twiddle says he never had a list of five other celebrities he would approach about the event if Schwarzenegger turned him down.

“I was begging Arnie and only Arnie,” he says.

Twiddle admits Schwarzenegger’s sixth tip is something he is still working on – giving something back to the community.

During his seven years as governor of California, Schwarzenegger did not take a wage, instead choosing to give his salary of hundreds of thousands of dollars back to the state.

“It was his way of giving something back,” Twiddle says.