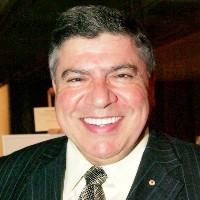 John Symond, the founder of Aussie Home Loans, has revealed he has taken five-year fixed loans for his Sydney investment property portfolio.

The refinancing was done this week.

“But I’ve gotta fess up, this week personally on a couple of properties, I’ve locked away five year fixed at high 4%s which you can get around the market.

“My feeling is I think you’re taking a risk by taking three years because you know rates between now and three years, over the next 12 to 36 months, that’s when probably interest rates will be trekking up.

“You are going to be locked in to the end of three years.

“You might find they will sail pass you, and when you come out of your three years you’ve missed the boat.

“Where as five years I think  you can’t go wrong, you are going to get two or three years premium low rates and I thought you know what I am going for it.

“So you know I think it is a good time to do it even if you go and fix part of your loan.

“I have three apartments, you know what I am going to lock them away and I don’t have to worry about rates moving up in 12, 18 months, two years time.”

Host Ross Greenwood, who described it as a pretty good tip, stressed investors needed to ensure their return covered the loan and the property would be held for the five year period.