Queensland brewery Black Hops Brewing has raised almost $300,000 in two days through the launch of an equity-crowdfunding campaign, but it’s not the founders’ first crowdfunding rodeo.

Founded in 2014, Black Hops’ history is the epitome of a craft brewery origin story, with mates Dan Norris, Eddie Oldfield and Michael McGovern banding together to launch the brewery after dreaming up an idea for an unusual beer flavour.

“We were just homebrewing at the time, and we thought up the idea for an eggnog stout. Though it sounded like a weird beer, it tasted really good, so we sent it around to a few bloggers who wrote about it,” Norris tells SmartCompany.

This off-the-wall brew sowed the seeds of a legitimate business idea, and later that year the three started doing small-batch contract brews through another brewer. It wasn’t until 2016 that the three opened their own brewery, but Black Hops has already hit its capacity.

“We’re pretty much maxed out at our current brewery, we’re only able to do about half a million litres a year and we’ve grown to 15 full-time staff,” Norris says.

With the ambition of opening another brewery, Norris and the Black Hops team took to crowdfunding, taking advantage of the recently legislated equity-crowdfunding regime in Australia.

Currently, the team has raised about $350,000 of their maximum $400,000 through platform Birchal, which Norris says is a smaller goal than most other raises, but much more achievable.

“We thought the way companies were raising was wrong, because most of them were trying to raise an infinite amount of money,” he says.

“They’re setting their minimums at $200,000 and maximums at $5 million when there’s no way they’re going to raise that much. The way we see it, if you have your max at a legitimate and sensible number, it increases the sense of urgency for people to get in and invest.”

“And if they miss out, you can just do it again next year.”

Norris believes Black Hops’ raise has seen such success due to the company having a strong community of customers who’ve been with the company since day dot, with the raise being a way to reward their loyalty.

“This money’s going to let us open up a new brewery in Burleigh Heads which should have 10 times the capacity of our current brewery,” he says.

Second time in the crowdfunding ring

Another factor to Black Hops’ funding success is the loyal fanbase it won through a previous crowdfunding campaign back in 2015, years before equity crowdfunding was legal in Australia.

At the time, all the three could do was run a rewards-based campaign, offering their contributors cases of beer once the brewery got up and running.

“Back then, there was no such thing as equity crowdfunding, but we wanted to launch our first brewery and we had just about enough money to do it,” he says.

“We ended up raising about $17,800, but for a brewery, we were never going to raise enough money through reward-based crowdfunding. It’s effectively just pre-selling your products; we didn’t make a lot of money.” 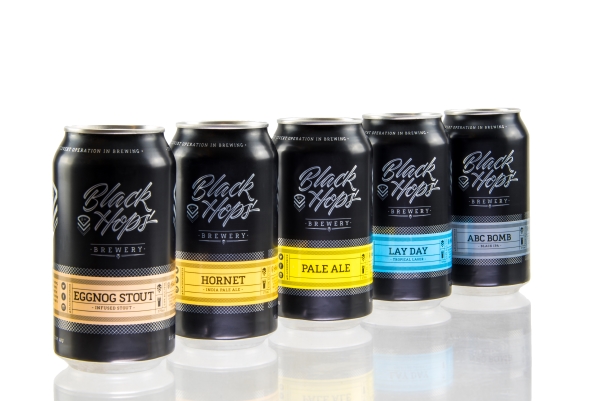 Reflecting on the company’s two crowdfunding raises, Norris says he wouldn’t have done anything differently, saying it has allowed the business to cultivate a community of fans and investors, with many who invested in the first raise coming back for the second.

So far there’s been nearly 300 investors in the equity-crowdfunding raise, with some putting in as little as $50. These investors are mostly “huge ambassadors” for the brewer, and are keen to see it head nationally.

However, Norris admits the company’s previous rewards-based campaign was “tough”, and advises businesses just think of it as pre-selling a product, rather than raising capital.

“Rewards-based is just changing the way your finances work, because you take the money now but you’ll still be up for the expenses later,” he says.

“If you just wake up and decided to do an equity-crowdfunding raise, you’re not going to attract many people. Not many Australians know what it is, and you need a lot of people following you to get in on the action,” he says.

Not all of Black Hops’ attention has been positive, however, as the brewery came under fire last year for naming one of its brews ‘Pussy Juice’, and including a sexually explicit poem along with the beer’s launch.

At the time, Norris told Women’s Agenda he was “horrified” and regretted giving the product the go-ahead.

“What we put out isn’t okay. We have learned a painful lesson and we are still trying to figure out what to do to prove we are really sorry,” he said at the time.

Dishing out equity no sweat

Norris was running his own online marketing business back in 2014 at Black Hops’ inception, and never thought he’d be working on the business full-time. But once it started exploding he made the switch full-time, and now calls the brewery his “proper job”.

“It’s a much more difficult business to run. Brewing is so competitive and so capital intensive, there’s no way to do it without putting in a hell of a lot of money,” he laughs.

“A big part of my job for the past year was just figuring out how to get enough money to get things going.”

Dishing out equity to hundreds of piecemeal investors might not sound like the world’s most attractive prospect, but Norris says it was inevitable for Black Hops, and far better than any alternatives.

“New breweries aren’t getting money from a bank, because they’re not in the business of funding ‘risky’ enterprises, so the only option is to release some equity a few times,” he says.

“And while I’d prefer to own the brewery 100 per cent with the three founders, we never could have built it otherwise.”

Norris says he’s also not stressed about the expectations of investors who might want an exit, saying he’s made it very clear Black Hops is not a business “that will be sold tomorrow”.

“This is a long term investment, and I think the investors understand that,” he says.