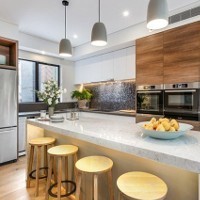 Melbourne couple Deanne and Darren Jolly have won The Block Triple Threat. In a battle of the buyer’s agents, Nicole Jacobs beat out fellow Block judge Frank Valentic to secure the winning townhouse for $2.29 million.

The returning couple’s renovation at 4/27 Darling Street (pictured above) sold for almost $835,000 over reserve at last night’s South Yarra auction, which was televised tonight.

Tonight’s results were likely a relief for The Block producers as well as Deanne and Darren, after The Block Glasshouse’s disappointing results. Last year, Dee and Darren took home just $10,000 after months of work, as did Carlene and Michael.

Queenslanders and audience favourites Jess and Ayden, often considered the underdogs this season, sold their renovation at 3/27 Darling Street in South Yarra for $2 million, $665,000 above their reserve price of $1,335,000.

Josh and Charlotte’s apartment was auctioned by returning auctioneer David Wood of Hockingstuart Albert Park. It seemed that auctioneers with Block success experience were a good bet for contestants – Deanne and Darren’s win marks the fourth Block win for auctioneer Damien Cooley. Cooley has now appeared on seven Block series.

The final results and reserves:

The Block claims this season it has given away the biggest prize ever awarded in television history, surpassing the $2.4 million amassed by contestants in The Block Fans v Faves.

After the reserves were announced, the auction order was determined. After some predictable quarreling, which saw Deanne and Darren insist they wouldn’t go first. Host Scott Cam had to resort to pulling names out of a hat to determine the order.

Tim and Anastasia chose the first position, Jess and Ayden went second. Deanne and Darren went third, with Josh and Charlotte the final team to auction their apartment.

Proceedings began with Tim and Anastasia’s unit, marketed by Doug Doyle and Russell Cambridge of Biggin & Scott Richmond. Buyer’s agent Jacobs began proceedings strong with a $1.5 million bid, battling it out with Valentic. A new bidder entered at $1.87 million, with Jacobs and Valentic continuing to bid, often at $10,000 or $20,000 increments. The third bidder wasn’t seen again, as the price surpassed $2 million. Jacobs secured the apartment for $2,175,000. The result gave Tim and Anastasia a $755,000 profit, about $75,000 for each week of work they put in on The Block.

Their earnings were well over the $636,000 profit taken home by Steve and Chantelle on The Block: Fans v Faves.

Jess and Ayden’s auction was second. Their townhouse, number 3, was marketed by Adam Joske and Joel Ser of Gary Peer & Associates, Caufield North. Stuart Benson auctioned the apartment. Jacobs again started bdiding off strong at $1.7 million, with Valentic quickly coming back with $1.8 million. A third bidder entered at $1.95 million. Valentic secured the apartment for a client at $2 million.

Third up was Darren and Deanne’s renovation, auctioned by Cooley and marketed by Andrew McCann and Carla Fetter of Jellis Craig. Bidding began at $1.9 million, quickly reaching $2.1 million. Valentic and Jacobs, along with a third bidder. Jacob held the property at $2.22 million, with Frank consulting a client over the phone pushing the price up by $5,000 increments. Jacob responded with a $2.25 million bid. Valentic resorted to a $1,000 bid.

Jacobs finally knocked Valentic out with a $2.29 million bid, with Deanne and Darren securing the $835,000 profit, making them the winners of the biggest prize ever awarded in The Block.

Finally, Josh and Charlotte’s townhouse went under the hammer. Unit 1 was sold through Wood with Mark Konishi and Georgia Whitford of hockingstuart South Yarra. Bidding yet again started strong at $1.8 million. Jacobs, Valentic and two other bidders were engaged, with Valentic and a bidder at the back of the room, who appeared to be Chris Barrett of Marshall White, going back and forth. Barrett secured the townhouse for $2.2 million, giving Josh and Charlotte an $810,000 profit.

The results were largely predicted, with buyer’s agents Greville Pabst and Frank Valentic, who served with Nicole Jacobs on the buyer’s agents jury this season, both tipping that Deanne and Darren’s apartment would attract the highest price.

Before the auctions, Frank Valentic said that “Darren and Dea’s fans will see a hotly contested auction for one of the biggest apartments and the only backyard on The Block.” Similarly, price prediction website realAs tipped that the Jolly’s renovation would sell for the highest sum, expecting a $1,654,000 price tag.

The results show was watched by just over 2 million in the five major capital cities.

Although another season of The Block is now over, it’s probably not the last you’ll see of The Block Triple Threat’s faces. While Deanne denies she’s set for the Real Housewives of Melbourne, Ayden and Jess will return to our screens on spin-off show Reno Rumble, while serial Block bidder and now judge Valentic may have a role on another production.

@IvanTrba Would love to be on next series of #TheBlock and glad I added some value but haven’t been asked yet. May be on another TV show