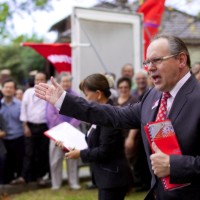 Calls for real estate agents to avoid holding “disrespectful” auctions on Anzac Day fell on the deaf ears of some realtors at the weekend, as buyers eagerly turned out to bid at a reduced number of auctions across the country.

Victor Dominello, the New South Wales Minister for Innovation and Better Regulation, also called for agents to hold off on auctions until after 1pm, when the main commemorative services had taken place, in-line with retail trading restrictions.

“Anzac Day falling on a Saturday is a once in a decade occurrence. Holding a property auction while the nation pauses to reflect on the 100th anniversary of the Gallipoli landings would be disrespectful,” said Dominello in a statement provided to SmartCompany.

“I have no doubt that many prospective buyers would be put off by an auction which clashes with local commemorative activities. It’s about exercising common sense.”

Meanwhile, Victorian Premier Daniel Andrews has signalled he may support legislation to ban auctions before 1pm on Anzac Day moving forward, although another Saturday Anzac Day will be years off.

But buyers were not deterred from the auction block, with 84.3% of the 550 auctions that did go ahead selling under the hammer.

Sydney, a market showing no signs of slowing down, held the highest number of auctions across the country, according to RP Data preliminary figures. Of those 249 auctions, buyers snapped up properties at 91.1% of the auctions.

Melbourne cleared 87.4% of its 169 properties, the state’s strongest clearance rate in recent weeks. SmartCompany understands some Victorian agents moved auctions past the 1pm deadline after being contacted and reminded by REIV.

Brisbane, the only state to actually ban auctions on Anzac Day, had pushed its 39 auctions forward to the first half of the week to meet demand.

But REINSW president Malcolm Gunning, who had advised his members last week not to trade, told SmartCompany despite buyer demand, professional agents should recommend to their vendors not to list on such a holiday.

“The agent controls the sales process… If the buyer wants to list [on Anzac Day], you’d be saying to them, ‘it’s not a good, day, it will impede the sale’, and if it’s an open for inspection, you’d say ‘we can do it Sunday’. If they really insist, you would tell them to do it after 1pm out of respect.”

“Whether it’s a day before or after, if it’s a popular property, buyers will still turn up,” he adds.

Gunning says international buyers or those from different cultural backgrounds might not understand the importance of Anzac Day but good agencies need to be aware of the cultural significance.

“All agencies should be mindful of it. I am very surprised anyone traded at all,” he says.

Cameron Kusher, senior economist for CoreLogic RP Data, told SmartCompany while the limited supply of properties likely played a key role in the strength of demand, buyers were drawn to auctions on Saturday because the country was otherwise quiet.

“For something like Anzac Day, there’s really not much to do – the shops are closed, the pubs are closed and the sport is not on until the afternoon,” says Kusher.

“I can understand why the turn-ups have been so good. But the surprising thing has been the strength of the clearance rates.”

Kusher says strong clearances are indicative of the strength of the current market.

“Ever since we saw interest rates cut in February, there has been a strong rebound in auction clearance rates in Melbourne and Sydney and renewed demand from buyers,” he says.