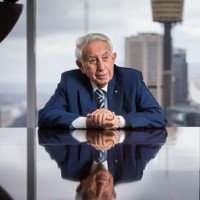 Apartment development group founder Harry Triguboff has raised the bar on his hopes for the sale price of Meriton to as high as A$15 billion.

But the rumoured suitors — Country Garden, China Vanke and Greenland Holdings — have seemingly yet to lob a serious bid.

For a long time Meriton was always spoken of as a $6 billion outfit, then a $10 billion price tag was bandied about by Harry.

In November, the Australian Financial Review‘s Street Talk column suggested an internal advice from Grant Samuel had it closer to the $12 billion based on a multiple of 10 times earnings, when recurring income was taken into account.

Meriton also revealed for the first time in its history that its net assets rose 21% to $7.4 billion last year and annual turnover jumped more than 50% to $2 billion in the past year. It jumped from 29th place on IbisWorld’s Top 500 to 11th place last year.

“I am learning about the (sale) process. To sell that type of business (Meriton) is a long process,” Triguboff told The Australian.

The wide-ranging interview with Lisa Allen saw Triguboff also note he did not sit on company boards like his peer Frank Lowy, who sat on the Reserve Bank board from 1995 to 2005.

Late last year Meriton advised it had been a record year for the apartment developer, with the company’s annual turnover rising more than 50% to A$2 billion, bringing it to 11th place in IBISWorld’s 2014 Top 500 Companies, up from 29th spot the previous year.

The company reported a 33% increase in visits to its sales website, www.meriton.com.au with the most popular searches in 2014, Parramatta, Mascot, Ryde, Zetland and Brisbane CBD.

In 2013 it was Parramatta, Ryde, Chiswick, Lewisham and Brisbane.